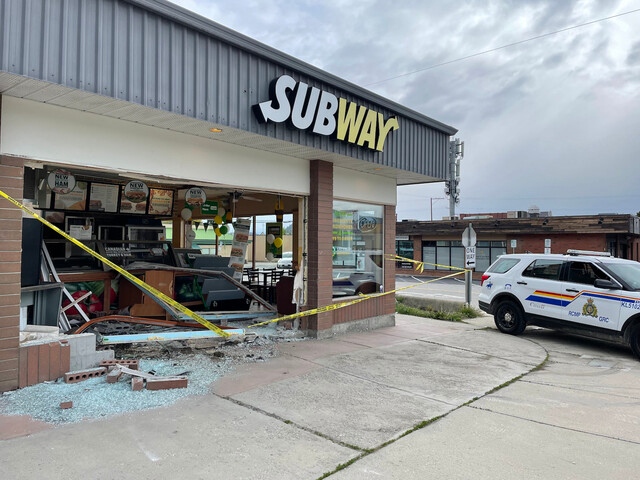 This photo by Colin Dacre for Castanet shows the damage to a Subway in West Kelowna following a crash.

A driver who ran a stop sign, T-boned a police vehicle, and crashed through a restaurant window early Saturday morning was arrested for being impaired in West Kelowna.

Images from Castanet show the damage done to the restaurant, a Subway.

This photo by Colin Dacre for Castanet shows the damage to a Subway in West Kelowna following a crash.

According to Mounties, the crash happened just after 1 a.m. on Main Street near Hoskins Road when the driver of a Dodge Durango hit an RCMP-marked Chevy Tahoe, only coming to a stop after ramming through the restaurant's front entrance./

Although the police SUV and the restaurant were seriously damaged, no one – including the driver of the Durango and the passenger in that vehicle – was badly hurt.

"This collision could have been much more serious," says a statement from the Kelowna RCMP.

The 30-year-old man driving the Durango was arrested and "released once sober to appear in court at a later date." Mounties say he may later face criminal charges, but the investigation is still ongoing.

Both the passenger of the truck and the officer whose vehicle was struck were taken to the hospital for minor injuries, and have since been released.

The Ukrainian Canadian Congress wants Russia expelled from the G20. The group's president, Alexandra Chyczij, has written to the prime minister asking him to lead a global campaign to expel Russia from the forum of leading economic nations.