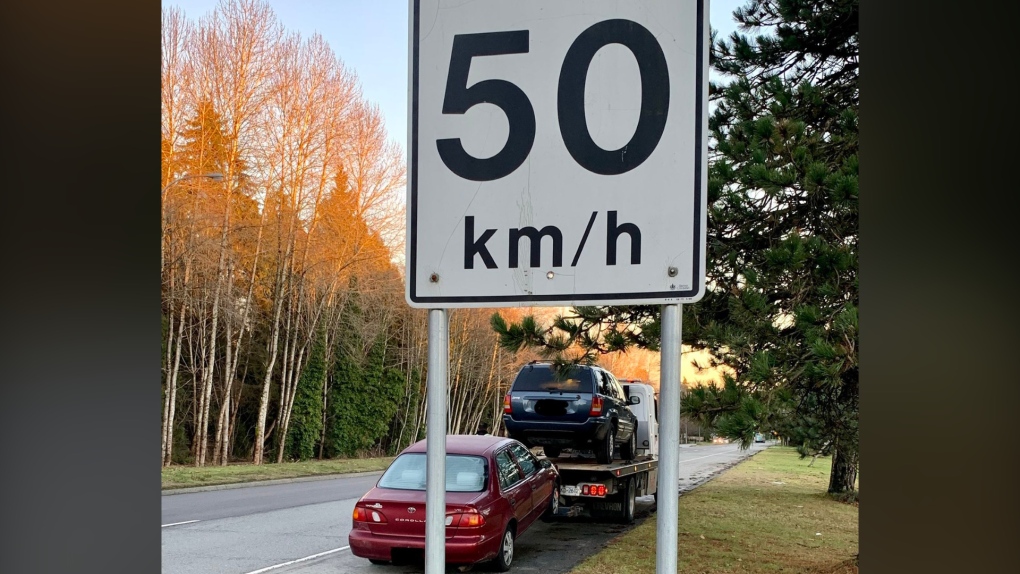 A photo posted by the Vancouver Police Department's Sgt. Mark Christensen shows a vehicle being towed after the driver was allegedly caught speeding.
VANCOUVER -

Sixty-two extra kilometres per hour is costing one dangerous driver $368, and one week without their Toyota Corolla.

Vancouver Police Department Traffic Unit Sgt. Mark Christensen posted a picture of the red car being towed on Twitter late Thursday. In the foreground, a big 50 stands out on the speed limit sign.

“When you are racing along SW Marine doing 112 km/h as the speed limit reduces to 50, you likely shouldn’t blame the cops for 'hiding in the bushes'…I was standing by the sign!” Christensen wrote.

The Vancouver Police Department told CTV News the driver is 26, and was pulled over near Camosun Street.

Police can impound vehicles for excessive speeding, which is defined as a speed greater than 40 km/h by the Motor Vehicle Act. The penalty for one speeding ticket can range between $138 to $483, depending on the offence, and three penalty points to the driver’s record.

On top of the fine, which gets higher depending on the offender’s speed, the driver will have to pay for towing and storage fees at the impound lot, and will have three penalty points on their driving record.

On Twitter, as his handle @baldguy1363 might suggest, Christensen often posts humorous quips about driving failures to his roughly 1,500 followers, though the dangers of speeding are no joke. According to RoadSafetyBC, speed is the leading cause of death on B.C. roads, accounting for an average of 82 deaths per year.

Data by DriveSmartBC shows that in 2021, the highest speeding ticket was 181 km/h in a 60 zone. The same year, speeding fines in Vancouver totalled $14,461,182, with funds going to support community safety and address local policing priorities.