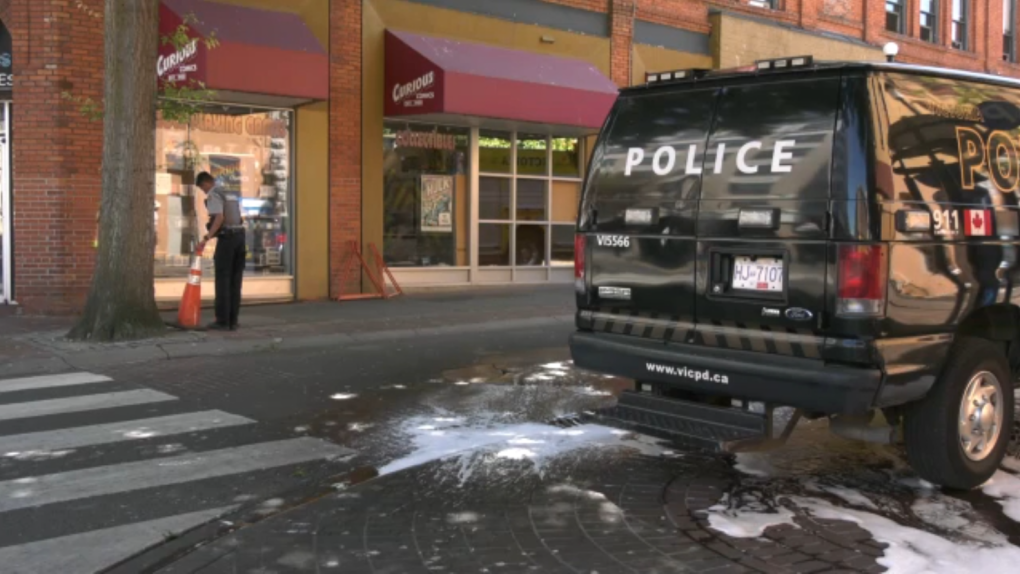 Victoria police officers were called to the intersection of Broad and Johnson streets just after 8 a.m. for reports of a fight. (CTV)
Vancouver -

Police in B.C.'s capital are investigating a stabbing that closed a downtown street for a few hours Saturday morning.

Victoria police officers were called to the intersection of Broad and Johnson streets just after 8 a.m. for reports of a fight, according to a news release from the department.

When they arrived, officers found a person suffering from stab wounds and "bleeding heavily," police said.

The victim was taken to hospital for treatment, and the injuries now appear to be non-life-threatening, according to VicPD.

Police closed the 500-block of Johnson Street as they began their investigation. They soon located a suspect nearby, in the 900-block of Pandora Avenue.

"While officers were taking the suspect into custody, the suspect headbutted one of the officers, resulting in a non-life-threatening injury," police said in their release. "The suspect was arrested without additional incident."

The suspect was taken to VicPD cells, police said, noting that they "recovered" several weapons during the arrest. They did not specify the number or type of weapons they found.

The investigation is ongoing, police said, adding that anyone who has information about the incident should call them at 250-995-7654, extension 1. Tips can also be provided anonymously via Crime Stoppers at 800-222-8477.

UPDATED | Election day 2021: Canadians to decide who will lead the country

After 36 days of parties campaigning for their votes, Canadians are making their voices heard, heading to the polls across 338 ridings to elect their next member of Parliament and ultimately determining who will form the next federal government at a pivotal time in the pandemic.

Live updates: Where can I vote and what do I need to bring?

Follow the CTVNews.ca live blog for real-time updates, analysis and 2021 federal election results as they come in. We will also feature updates from the headquarters of every major federal party.

Canada-U.S. border impact uncertain after U.S. says foreign visitors will have to be vaccinated

U.S. President Joe Biden's administration has announced its first clear indication that it is preparing to ease travel restrictions first imposed in March 2020, but details are in short supply, including how the new policy will specifically impact travel at the Canada-U.S. land border, where non-essential visitors remain prohibited from crossing.

The lead detective on the horrific murder of an Ontario doctor says the killer made one big mistake when trying to cover up the crime, leaving investigators a calling card that led them straight to his door.

New therapy for babies can reduce likelihood of autism diagnosis by two-thirds: study

Australian researchers say a new form of therapy for babies showing early signs of autism can reduce the likelihood of a diagnosis by two-thirds.

Long lineups form outside some polling stations across Toronto

Long lineups are forming outside some polling stations across the Greater Toronto Area after the number of voting venues in several GTA ridings were slashed amid the COVID-19 pandemic.

Pfizer Canada says it plans to provide Health Canada with data showing its COVID-19 vaccine works for children in a bid to seek authorization 'as early as possible.'