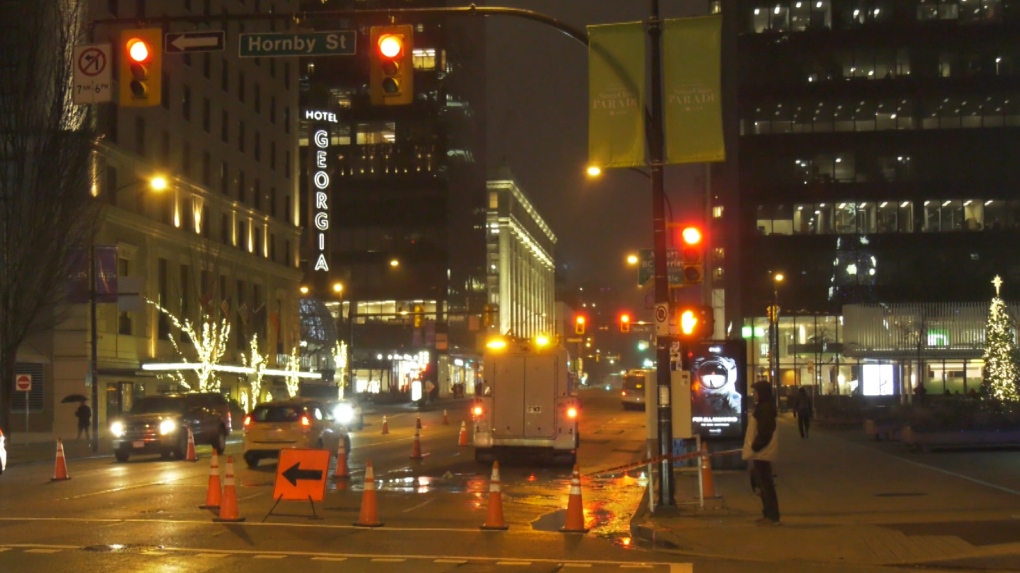 The water main broke at West Georgia and Hornby streets, on the north side of the Vancouver Art Gallery.

Crews were on scene before 5 a.m. but could be in the area for at least six or seven hours. They've closed two eastbound lanes on Georgia as water floods the street.

"Installed almost 100 years ago, the water main has reached the end of its service life and has a history of recent breaks," the City of Vancouver said in a news release. "The most recent break occurred this morning."

In September, the water main broke in the same area, but in that case water and debris shot several hundred metres into the air and the massive stream could be seen from blocks away.

The city said construction to replace the main will begin on Jan. 6 and is estimated to be complete by mid-April 2020.

"The replacement project involves replacing 375 metres of aging water main and sewer infrastructure in three phases from Howe to Thurlow streets," the city said. "The new water main will last about 100 years and contribute to a more seismically resilient water network."

During construction, at least three lanes will be open: two heading west and one heading east. However during rushes, two lanes in each direction will likely be open.

"Commuters should expect significant delays along the Georgia corridor in each direction and plan ahead," the city said.