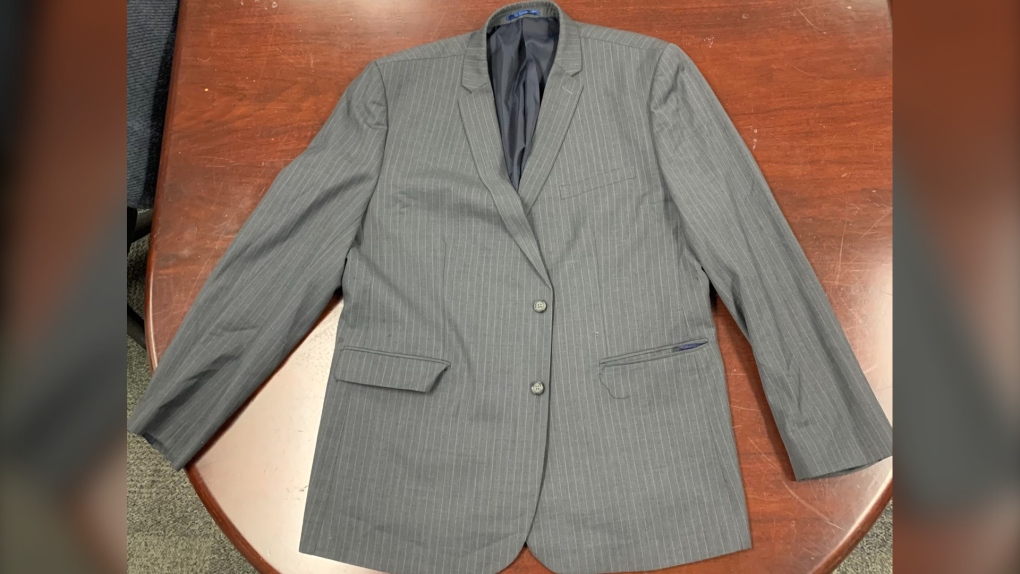 Police in New Westminster are looking for someone who recently donated a grey suit jacket to a thrift store, after "items of significant value" were found inside the pocket. (NWPD)

Police in New Westminster, B.C., are looking for someone who recently donated a grey suit jacket to a thrift store, after "items of significant value" were found inside the pocket.

The New Westminster Police Department said in a news release Thursday that it had been made aware of the blazer on Jan. 11. Police are now hoping to return the jacket and the valuables to their rightful owner.

The department did not elaborate on what sort of valuable items had been found. Typically, police opt not to publicize the specific nature or value of found property because they're relying on the owner's ability to describe it in detail as a means of verifying ownership.

CTV News Vancouver reached out to the NWPD to ask if any more details about the found items can be shared. The department declined to elaborate on what the found items are or how much they are worth.

Police said in their statement that the blazer was found in a New Westminster thrift store, but it's unclear whether it was donated in that city or somewhere else.

“This is a great reminder to check your pockets before donating any items to the thrift store,” said NWPD spokesperson Sgt. Sanjay Kumar, in the release.

“Please take a close look at this blazer to see if it is yours. We’re hoping to find who the rightful owner of this blazer is and return these items to them.”

Police shared photos of the jacket, which they described as a grey RW&CO. blazer with a white pinstripe. It is size 48 and has a blue lining. They're asking the garment's rightful owner to call them at 604-525-5411.

Gasoline prices are showing no signs of letting up as the average price in Canada tops $2 a litre for the first time. Natural Resources Canada says the average price across the country for regular gasoline hit $2.06 per litre on Monday for an all-time high.

The Ukrainian government says Russia has shelled more than 1,000 schools, destroying 95. Intentionally attacking schools and other civilian infrastructure is a war crime. Experts say wide-scale wreckage can be used as evidence of Russian intent, and to refute claims that schools were simply collateral damage.

A match made in marketing heaven between Tim Hortons and Justin Bieber is back with a new French vanilla-flavoured chilled coffee. Biebs Brew is the pop star's rendition of the coffee chain's cold brew coffee launched last year.

A gunman motivated by hatred against Taiwan chained shut the doors of a California church and hid firebombs before shooting at a gathering of mostly elderly Taiwanese parishioners, killing a man who tackled him, authorities said.