Do B.C. women do more housework than men? Poll highlights divisions of labour

Half of B.C. women believe they do more work around the house than their partners, according to a new survey that's sure to spark some interesting conversations among couples.

Tackling the touchy topic of household chores, Insights West asked 509 British Columbians who live with a romantic partner how they divide up their duties.

What they found was that many still adhere to some stereotypical gender roles – and that a huge number of women perceive they're doing more of the housework than men.

"The key finding of the study is that in many homes across British Columbia in 2019, there are still throwbacks to 1959 despite the progress and changes in gender relations over the past 60 years," Insights West said in a news release. 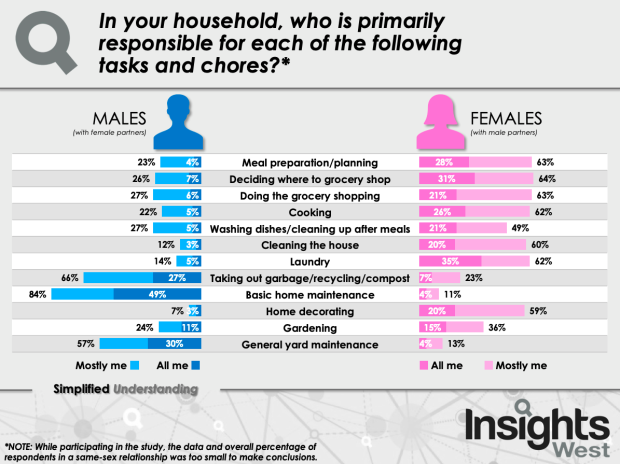 Despite that, only a small percentage of women (13 per cent) said the division of labour around the house is unfair. Forty-one per cent said it's "somewhat fair" and 46 per cent described it as "very fair."

Just five per cent of men called the division in their home unfair, while 95 per cent said it was either "somewhat" or "very" fair.

"Younger generations … become increasingly more equal in the splitting and sharing of responsibilities in running a household, but the stereotypical differences are still striking," the polling agency said.

Beyond chores, pollsters found major divisions when it came to childrearing responsibilities, with women more likely to drive children to and from school and daycare, and more likely to help with homework and putting kids to bed.

And while 71 per cent of B.C. men felt disciplining their children was a shared task, only half of women agreed. About a quarter of women said it either mostly or all fell on their shoulders.

The Insights West survey was conducted online from May 13-20 among 509 B.C. adults. Polls of that size have a margin of error of plus or minus 4.3 percentage points, 19 times out of 20.

To read the full survey, visit the Insights West website. 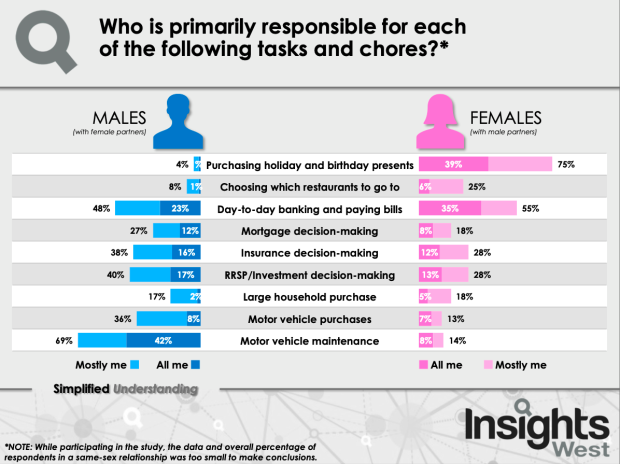