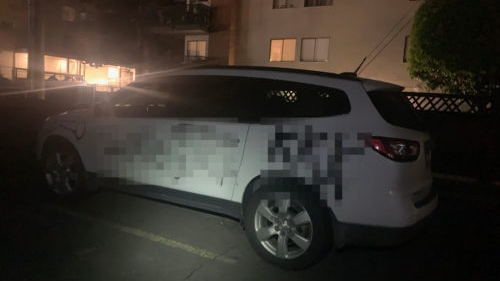 Racist graffiti spray painted on buildings and vehicles in New Westminster has prompted a police investigation in the city.

Police could not find anyone matching the suspect description, but they searched the area for surveillance video and evidence.

"When I saw this graffiti I was disgusted with what I was reading," said Sgt. Justine Thom in a news release Thursday.

Nearly two weeks before that, a person in Queensborough reported to police that racist messages were scratched into his vehicle, which was parked in the South Dyke Road area. Police think the incident likely happened overnight on June 5 or June 6.

"Racist incidents are taken seriously by the New Westminster Police Department," Thom said. "This investigation is ongoing and we’re asking anyone with information who has not yet spoken to officers to call us."

The suspects from the June 17 incident were described as white men between 20 and 30 years old. Both are about 5'7" tall. One was wearing a black hoodie while the other was wearing a red hoodie.