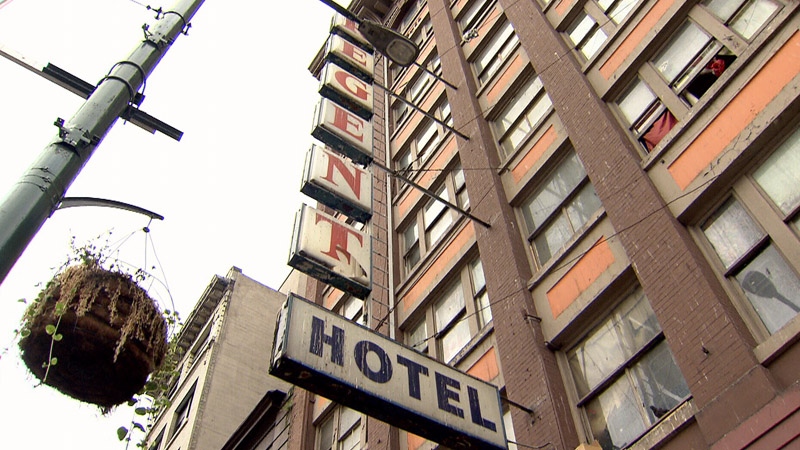 With help from the province, the City of Vancouver is closing a notorious single-room occupancy hotel.

Officials announced Wednesday that the hotel which has long been the subject of complaints from neighbouring businesses is not a safe living environment.

The building at 160 East Hastings St. was condemned over structural deficiencies "due to decades of underinvestment and mismanagement by the building owners," according to the city's chief building official. The building is owned by the Sahota family, as is the recently condemned Balmoral Hotel.

As a result, an order was issued Wednesday that occupants must leave by June 28.

Instead, those who called the Regent home will be moved into safer accommodations, city officials said at a joint news conference with provincial Housing Minister Selina Robinson.

"Everyone deserves a healthy place to call home," Robinson said.

That healthy place, in this case, is the Jubilee Rooms. The province purchased two adjacent buildings on Main Street near Cordova Street with space for the Regent's 80 residents for $12.5 million.

The buildings will be monitored and managed by grassroots organization RainCity Housing. Tenants will live in renovated rooms, and will have access to meal programs and 24/7 support services.

Units in the Jubilee Rooms will be rented at shelter rates, at or below the maximum of $375 per month.

Under the province's Residential Tenancy Act, it is the building owner's legal obligation to support tenants with relocation and compensation. The city will work with other partners to provide supplemental support and ensure residents are properly compensated.

About 50 people have already moved to other locations in recent weeks.

The closure of the long-standing SRO followed years of health and safety violations that were not addressed by the owners, the city said.

Owners were ordered several times to improve conditions. More than 1,000 bylaw violations were reported, and about 445 are making their way through the court system.

The city also worked with the owners to hire professionals to remedy the building's safety issues, and while work was started, it was never finished.

"After many years of deplorable negligence by the owners of the Regent Hotel, the city and province must intervene for the safety and well-being of tenants," Vancouver Mayor Gregor Robertson said.