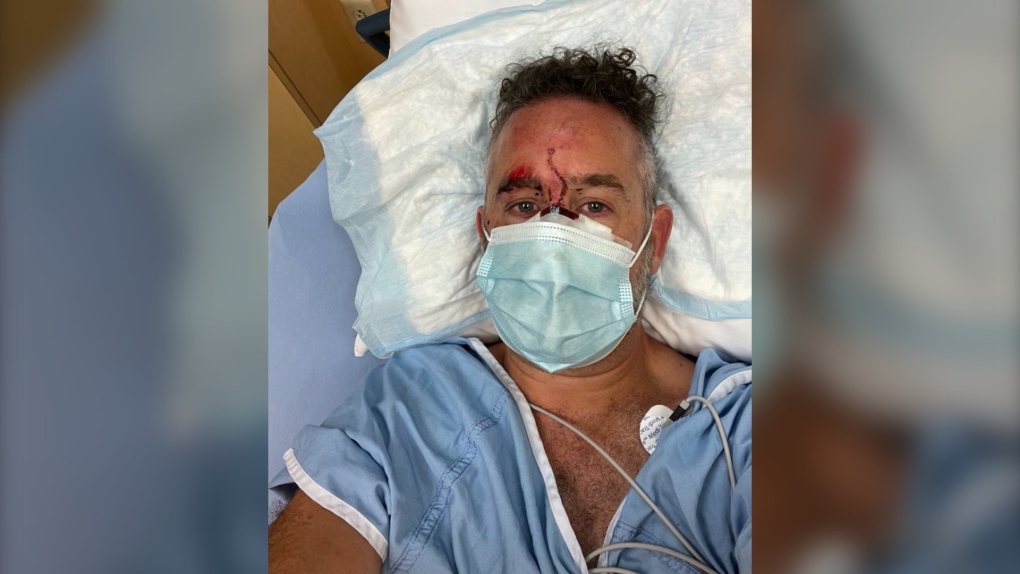 Jeff L. Lieberman, seen here in a selfie while in hospital, is hoping to find and thank the three people who tended to him after his bike accident on Laurel Street in Vancouver, B.C. on Sept. 5, 2021. (Twitter)
Vancouver -

When long-time cyclist Jeff L. Lieberman decided to spend the summer visiting family in Vancouver, he likely didn’t expect a bike accident, an ambulance ride and then a search to find the people who saved his life.

Last Sunday, Lieberman was riding a spare family bike from his sister’s house in Mount Pleasant to his parents’ place near Jericho Beach, when a brake cable snapped as he rode down a steep hill.

It sent him flying off the seat.

“Based on my injuries, I landed on the right side of my face, and definitely hit my head,” he said.

He also broke his nose and a finger, and was badly scraped. Later that evening at the hospital, he was diagnosed with a mild concussion – even though he’d been wearing a helmet.

One week later, Lieberman’s stitches are out, and he’s slowly recovering.

He’s also trying to track down the people who helped him, but his memory of the crash and the aftermath is hazy.

“I have spotty memory of what was going on,” he said. “I was really unclear as to what city I was in and what year it was, (and) why was I in Vancouver? How long had I been here?”

What Lieberman is certain of is that the accident happened on Sept. 5, around 5:25 p.m. on a steep section of Laurel Street, between 8th and 7th Avenues. Three strangers tended to him, provided care for his cuts, called 911 and stayed with him while they waited a half hour for an ambulance.

“I feel like they saved my life, essentially,” he said.

“I don't want them to feel like that was not recognized or that it was forsaken in any way because it was extremely important to me.”

“I'm having trouble processing everything that happened and I feel somewhat sad or guilty that I haven't, you know, recognized them in some way.”

The people also helped him locate his cell phone and encouraged him to call a family member.

“I called my sister and she happens to be an ER nurse at VGH. She wasn't working that day but I just came from her house and she basically said, ‘Hold on I'm getting in the car and coming there.’”

But, likely focused on her brother’s wellbeing, Lieberman’s sister also didn’t manage to get the contact information for those who helped.

Lieberman, a filmmaker who lives in New York, said he thinks that one of the people was a male firefighter. The other two were women, and all three appeared to be white.

“It's nice to be reminded that there's humanity in the world and that people are generous. You know, we live in such divided times, even in Vancouver, that it's nice to see people helping,” he said.

In his efforts to find them, Lieberman put up a sign at the site of the accident, in which he described the incident and posted his contact information. He also shared some of his story on Twitter and Instagram. But, he still hasn’t heard from his heroes.

“I'm sure whatever they witnessed was traumatic. So maybe this would help them close that chapter as well,” he said.

“'I’m sure they didn't really want to, like, interrupt their day for 45 minutes with a bleeding person, a stranger, but yeah, they did. And it was really kind and generous of them.”

Did you help Jeff L. Lieberman? Contact him at jeff@re-emergingfilms.com

The name of the cyclist in this story has been corrected. It's Jeff L. Lieberman, not Phil L. Lieberman.