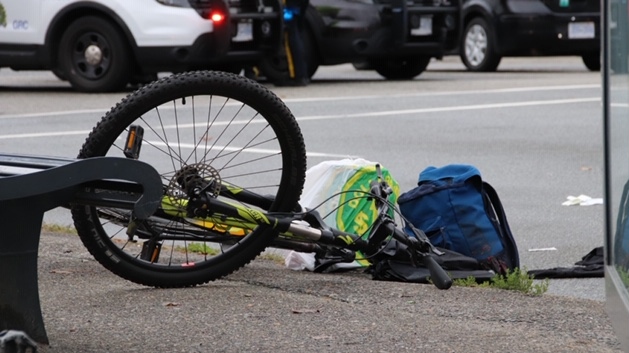 This bike was seen lying on the sidewalk at the scene of the crash.

The cyclist sustained life-threatening injuries and was transported to hospital in critical condition, police said.

Photos from the scene show a bike lying on its side on the sidewalk. On the street are someone's clothes, shoe and baseball cap.

A silver Honda sedan behind police tape also had a smashed windshield on its passenger side.

Mounties said the driver of the vehicle stayed at the scene after the crash, adding that the incident is still under investigation.

Investigators closed 140 Street southbound and 104 Avenue westbound while they gathered evidence. Police said they expected the roads to remain closed for several hours.

Anyone who witnessed the incident or has more information about it is asked to call Surrey RCMP at 604-599-0502. Tips can also be provided anonymously through Crime Stoppers at 800-222-8477.