Cyanide poisoning recall expanded to include another brand of apricot kernels 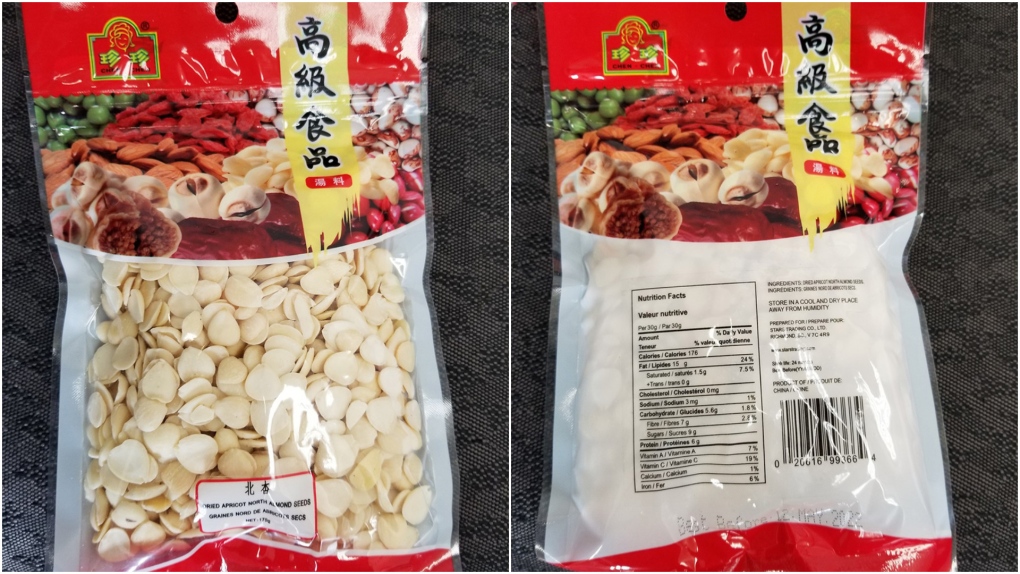 Chen-Chen brand Dried Apricot North Almond Seeds are shown in a photo from the CFIA.

VANCOUVER -- A recall first issued last month involving a product sold in B.C. has been expanded to include another brand.

Anyone who has the product at home is told to throw it out or return it to the store where it was purchased.

The recall is due to a risk of acute cyanide poisoning. Apricot kernels contain amygdalin, a natural toxin which, when consumed, is converted by the body to cyanide.

The kernels are the seeds found inside the pits of apricots. They look like small almonds and some describe the taste as almond-like.

Amygdalin is sometimes referred to as vitamin B17, though Health Canada does not recognize this vitamin under the federal Food and Drug Regulations.

"Health Canada considers any food, including apricot kernels, making a statement or claim relating to its 'vitamin B17' content to be in violation of the regulations," the federal agency says.

Some cyanide can be tolerated and passed by the body, so these products can be legally sold in Canada. However, health officials have established a maximum allowable level of total extractable cyanide kernels can contain.

Anything with a level higher than 20 parts per million cannot be sold.

The product subject to this week's recall was identified through testing and is being removed from stores.

Late last week, CFIA announced the recall of other apricot kernels sold in B.C. for the same reason. Read more on that recall.