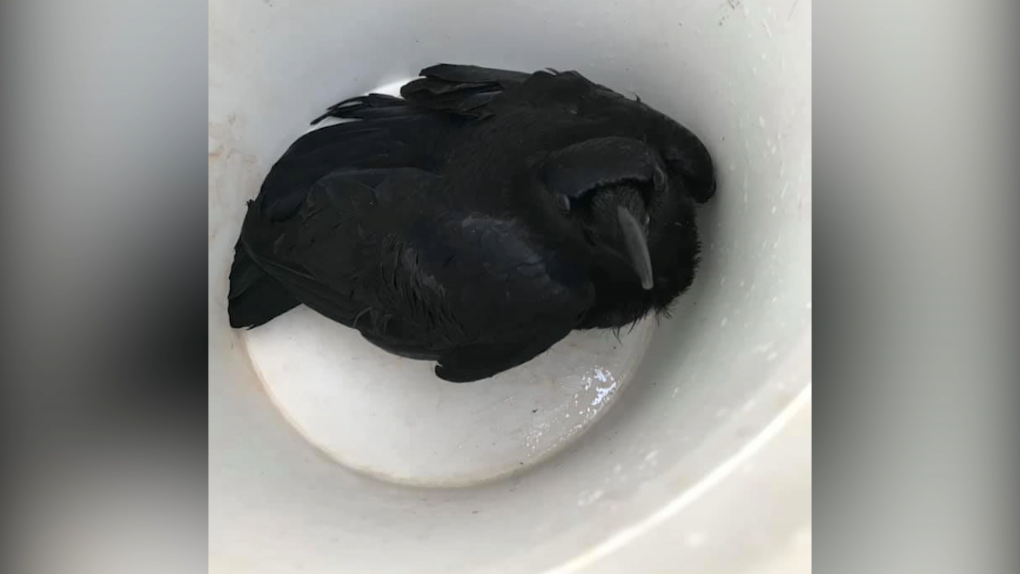 A rescued crow is seen in a bucket in an image from Surrey, B.C., firefighters on Wednesday, March 31, 2021.

VANCOUVER -- You've probably heard anecdotes of firefighters being to help get a cat out of a tree, but what about a crow?

Firefighters in Surrey, B.C., say they were called to assist when a crow somehow became wedged in a tree.

The bird was trapped between some branches high up in the tree, they said in a post on social media.

They acknowledge it wasn't an emergency, but say it was a good opportunity to do some tactical training with their aerial truck.

This benefit was in addition to helping an animal in distress.

The end result, they say, was one happy crow in a bucket.

Crows have a history of making headlines in Metro Vancouver, though generally news-making birds aren't playing the role of rescue subject.

Every year, residents report being dive-bombed while going about their business, especially during the spring nesting season. https://bc.ctvnews.ca/why-crows-dive-bomb-people-s-heads-and-what-to-do-about-it-1.4945482

They've been known to delay takeoffs at Vancouver International Airport, and have been the inspiration behind the names of some local bars and restaurants.

And one particular crow has gained a bit of a reputation in Vancouver as a friend to some and enemy of others.

Nicknamed "Canuck," the crow that disappeared in September 2019 https://bc.ctvnews.ca/10-000-reward-offered-for-safe-return-of-vancouver-s-famous-crow-1.4577666, is perhaps best known for stealing a knife at a crime scene.

He's also been spotted on the SkyTrain, was accused in an incident at McDonald's, managed briefly to delay mail delivery, and once had a "job" at the annual Pacific National Exhibition.