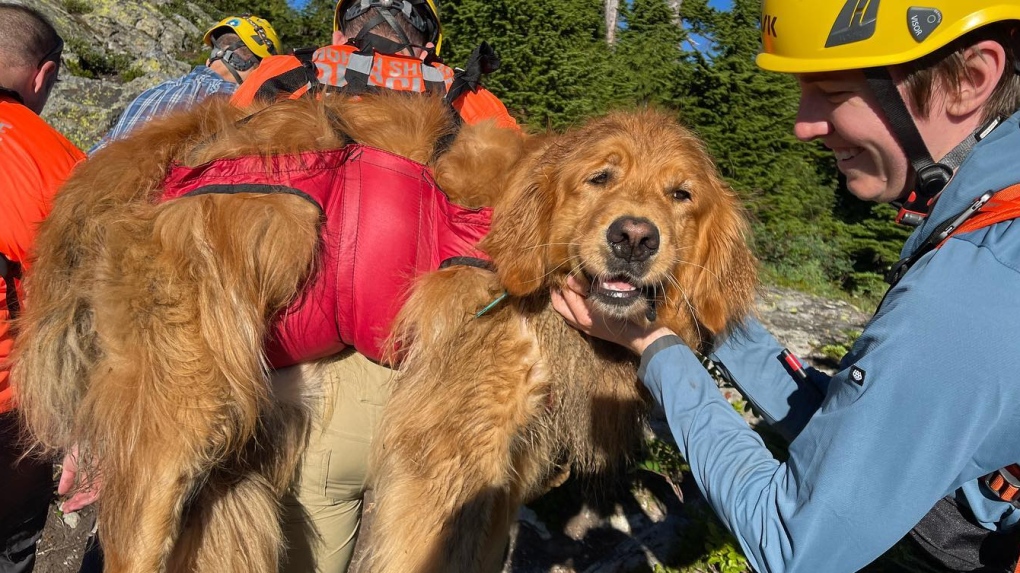 Search and rescue crews carried a dog with injured paws to safety on the North Shore Mountains this week, prompting a warning to other hikers with pets.

Doug Hope with North Shore Rescue said the team received a call Tuesday from Tim Jones Peak on Mount Seymour, where a woman was struggling to help her injured dog down a steep path.

Worried the dog's owner could get hurt, the team set up a landing pad and called for a Talon helicopter.

"Some rescuers went down to their location and actually carried the dog back up to the helipad and we helicoptered them out," Hope said.

Images posted on North Shore Rescue’s Instagram page show the animal being carried with bandages on its paws. Authorities said the dog weighed in excess of 100 pounds.

It was a long day for rescuers, who were already in the Mount Seymour area after helping another hiker. Hope said the man injured himself on a secluded trail to Elsay Lake where there's no cellphone reception, but was fortunately well-prepared with a satellite communication device.

Hope said being ready for challenging hikes is crucial for both humans and their pets, cautioning that paw injuries are common in animals that aren't accustomated to rocky terrain.

"It's pretty typical," he said. "There's lots of sharp rocks and granite, so a dog can't just go from walking around the city to doing an arduous hike like Seymour."

Hope recommended dog owners use paw protectors if they suspect their animal will be susceptible to injuries.

North Shore Rescue responds to similar calls in the winter as well, Hope noted, when ice can get between the pads on their paws and cause injuries.