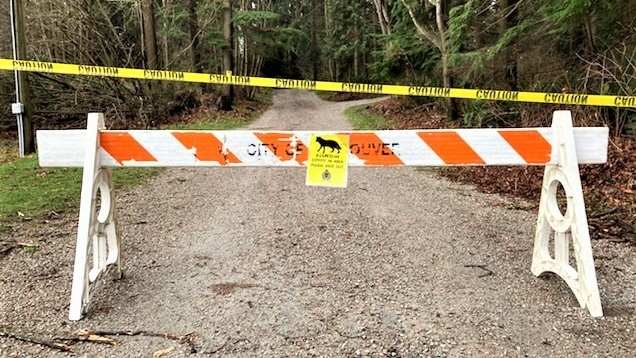 Trails have been closed after aggressive coyotes reportedly nipped at joggers. (BCCOS/Facebook)

VANCOUVER -- A coyote matching descriptions of one that has been nipping joggers in Stanley Park has been captured, Vancouver's park board says.

On Friday, conservation officers closed some trails in the popular park after getting multiple reports of an aggressive coyote that had been approaching and nipping joggers in the legs.

In spite of the closures, the Vancouver Park Board said two more reports of similar incidents were received, but luckily nobody was seriously injured.

"It matches descriptions of a coyote nipping joggers near Brockton Oval, including two cases over the weekend," a post from the park board on Twitter says.

Even so, the trails around Brockton Oval remain closed. The park board did not indicate when they would reopen.

The B.C. Conservation Officer Service said in a Facebook post that officers "believe this escalating and abnormal coyote behaviour is due to being fed by people" and that it will still have a presence in the park.

Before the weekend, Sgt. Simon Gravel with BCCOS said there had been five reports since Dec. 20.

"It happened on the seawall or a trail close by; in every situation it's the same scenario, the coyote (has) approached from behind and has bitten a runner," Gravel told CTV News last week.

The advice from conservation officers if a coyote approaches you is to "make yourself as large as possible, face it, wave your arms, yell, and throw sticks, stones or other objects."

Sightings and encounters should be reported using the Report All Poachers and Polluters line at 1-877-952-7277. They can also be reported on the Stanley Park Ecological Society website.