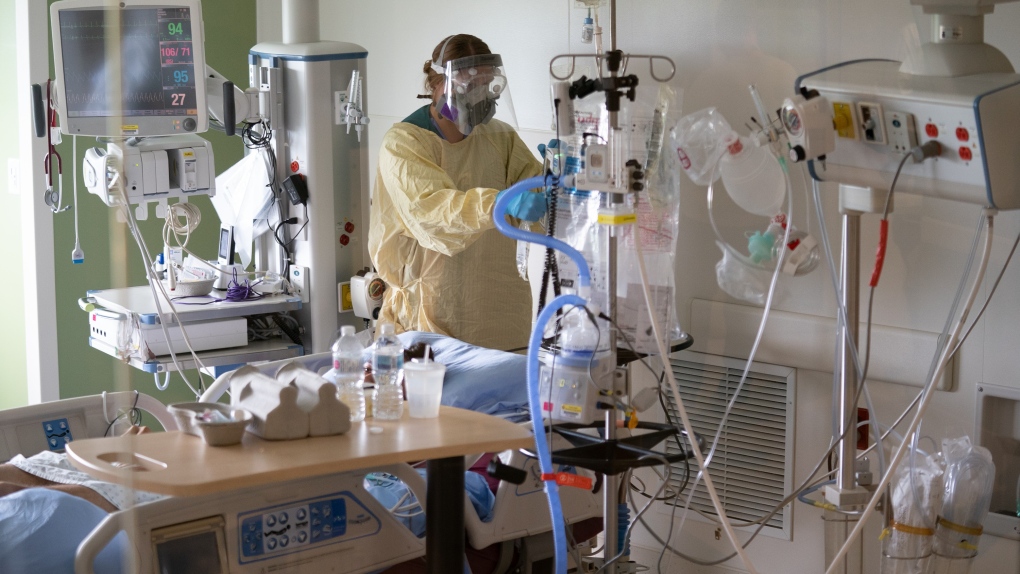 A nurse attends to a patient in the COVID-19 Intensive Care Unit at Surrey Memorial Hospital in Surrey, B.C., Friday, June 4, 2021. THE CANADIAN PRESS/Jonathan Haywar
Vancouver -

B.C. health officials have announced 553 new cases of COVID-19, one related death and one new outbreak in the province's health care system.

A total of 157,567 coronavirus infections and 1,782 deaths have been recorded across B.C. since the start of the pandemic, according to Wednesday's update from the Ministry of Health.

The latest cases pushed B.C.'s seven-day average for infections to 531 per day, which is the highest it's been since May 15, but an increase of just two cases per day from Tuesday's update.

That figure increased an average of 21 cases per day over the preceding week.

About 42 per cent of the 553 cases came from Interior Health. The health authority reimposed several local COVID-19 restrictions on the Central Okanagan on Aug. 6 to combat a rapid increase in infections, and has seen a levelling off of case numbers in recent days.

The 230 cases announced in Interior Health on Wednesday pushed the region's seven-day average down to 259, a slight dip from 263 on Tuesday.

Health officials have indicated they plan to combat rising infection numbers with targeted restrictions, and have not signalled that any further measures are pending anywhere outside of Interior Health.

Provincial health officer Dr. Bonnie Henry and Health Minister Adrian Dix did recently announce that vaccines will soon be mandatory for all employees and volunteers at long-term care homes and assisted living facilities.

B.C.'s plans for keeping teachers and students safe during the coming school year have yet to be announced. Children under the age of 12 remain ineligible for any of the COVID-19 vaccines in Canada.

A total of 7,265,222 doses of the Pfizer-BioNTech, Moderna and AstraZeneca vaccines have been administered across the province so far. Nearly 83 per cent of eligible residents have received at least one dose, and nearly 74 per cent have received both doses.

Correction: A previous version of this story reported there were 12 active outbreaks in B.C.'s health care system. There are 11.