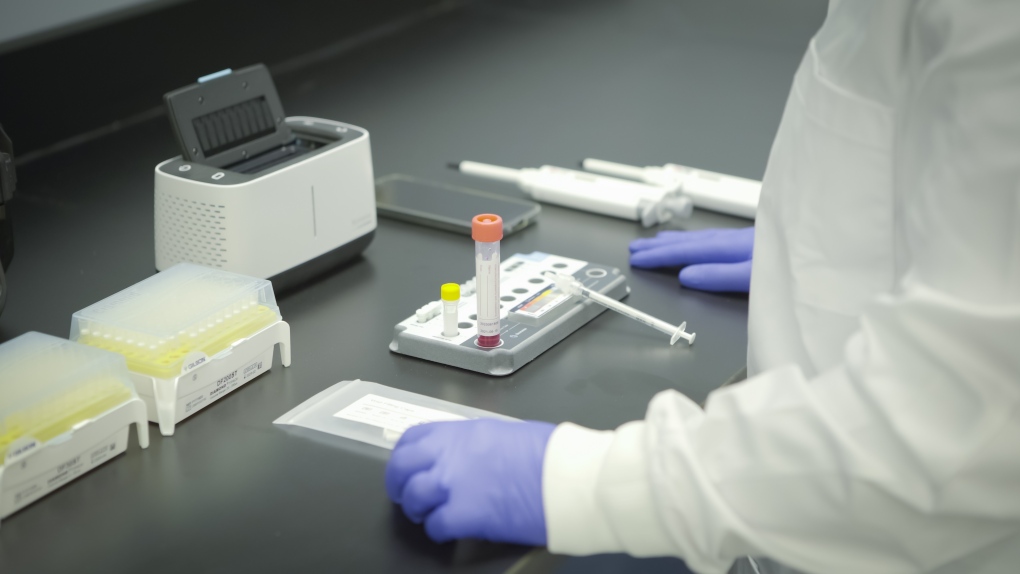 Health Canada has approved a new rapid test made by a Canadian company for use across the country. (Precision Biomonitoring)

VANCOUVER -- Despite some calling for B.C. to increase its use of rapid tests as a way to prevent further spread of COVID-19, the province's top doctor says there are very specific situations when health authorities will use one.

Dr. Bonnie Henry spent a significant portion of her COVID-19 briefing Thursday explaining how some rapid tests available in B.C. work and in what instances a health-care worker would use one.

"We have a strategy that has developed and evolved since we started to receive these tests early in early November of 2020," Henry said, calling the tests "another tool" to help with contact tracing and outbreak response.

Henry said that while Canada approved rapid point-of-care tests in October, validation of those tests had to be done in B.C., which took some time. After that, Henry said 39 pilot projects were completed to understand the ideal way for the tests to be used.

The top doctor explained that these quicker, point-of-care tests are best used to supplement the traditional PCR tests, which are normally used to detect COVID-19.

"We've used them in settings from long-term care facilities, rural and remote settings," she said, explaining that they've also been used in correctional facilities and to detect how far a workplace outbreak has spread among employees.

"We've been using it as well to help us understand whether there's been transmission from the variants of concern in school settings."

Henry pointed to rapid testing that was done recently when the highly contagious B.1.1.7 variant, most commonly associated with the U.K., was detected in multiple schools. Health-care workers also used rapid tests at Garibaldi High School last month when an entire cohort was tested.

"We used both the point-of-care testing, the rapid tests, to understand anybody who might be infected at that time but we also had to use the PCR test so that we could understand the accuracy of the rapid test," Henry said.

Another use for rapid tests is before surgeries. Henry explained that someone might get a negative test result three days before their procedure, but if they have the sniffles on the day of their appointment, a rapid test can help health-care workers confirm it's safe to proceed.

Rapid tests have also been used on the Downtown Eastside where people are often living in congregate settings and in cases where it might be hard to tell what an individual's symptoms are from.

In January, researchers at Simon Fraser University suggested rapid tests could have prevented half of the deaths in B.C. care homes last year.

Henry said once the tests were actually approved for use in the province, some care homes began using them to screen health-care workers.

"We've done that in seven different long-term care homes so far," she said. "Of the thousands of tests that we have done, two of them have been positive. And both those cases were in facilities that were having an outbreak."

Even if rapid tests are used more, Henry said they don't take the place of public health measures.

"We still have a lot of questions about places where they are best used," she said.

B.C. 'full steam ahead' in using AstraZeneca as review deems it safe for use

'I don't feel ready at all,' Vancouver's Miller says in 'brutally honest' answer on Canucks' return after COVID-19 outbreak