The number of Lower Mainland schools on COVID-19 exposure lists continues to decline, but this week, it's schools in the Fraser Health region that are driving the change.

As of Friday, there were a total of 94 schools listed on the Vancouver Coastal Health and Fraser Health exposure lists, a significant decrease from the 145 schools that were on the lists last Friday.

Seventy of the schools on the list Friday were located in the Fraser Health region, down from 123 last week.

In Vancouver Coastal Health, meanwhile, the number of exposures increased slightly, from 22 last week to 24 on Friday.

Schools are added to the health authority lists when someone in the school community tests positive for COVID-19 and was at school during their infectious period. Letters are sent home to everyone in the school community notifying them of the exposure, and health officials reach out directly to those who were close contacts of the infected person.

A school remains on the list until 14 days after its most recent exposure date.

Still, the number of exposures on the list continues to trend downward along with B.C.'s seven-day rolling average of new cases and its active caseload. 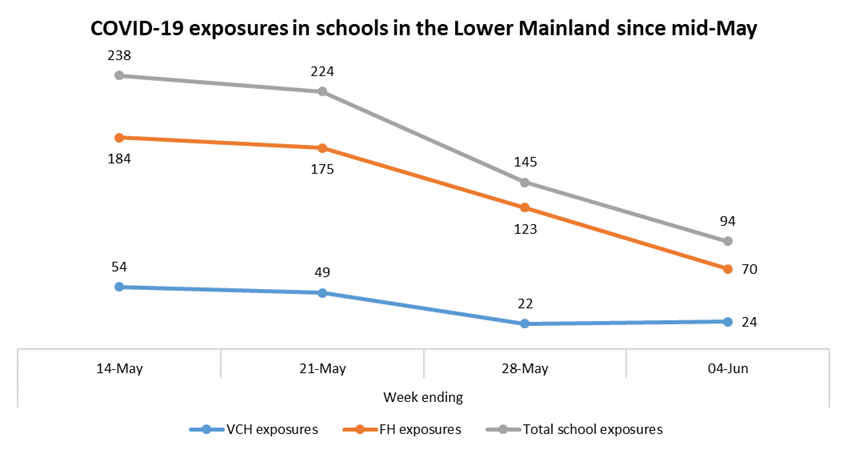 The slight increase in the number of schools with COVID-19 exposures in the Vancouver Coastal Health region may reflect recent trends in coronavirus transmission in the region.

While Fraser Health saw decreases in the number of cases per 100,000 residents in each of its local health areas during the last week of May, Vancouver Coastal Health saw increases in four regions.

The most significant jump was in North Vancouver, where case rates doubled from four to eight per 100,000 between the weeks of May 18 to 24 and May 25 to 31.

North Vancouver's school district had five active exposures as of Friday, up from just two exposures that were on the list on May 28.

Of course, the trend in the number of school exposures doesn't necessarily capture the severity of the situation in any given school. Though Fraser Health has seen notable declines in the number of schools on the list, one of the schools on the list as of Friday was Iqra Islamic School in Surrey, where a COVID-19 outbreak was declared earlier this week after 21 students and staff members tested positive for the disease.

CBRE Group Inc. says the national office vacancy rate hit 15.7 per cent in the third quarter for the highest level since 1994 as people continue to work from home because of COVID-19.