COVID-19 in schools: Fewer exposures in B.C.'s Lower Mainland this week, amid floods

The number of recent COVID-19 exposures in Lower Mainland schools has declined considerably compared to what it was last week.

As of Friday, there were a total of 135 schools listed on the Vancouver Coastal Health and Fraser Health COVID-19 exposure websites, down from 173 the week before. 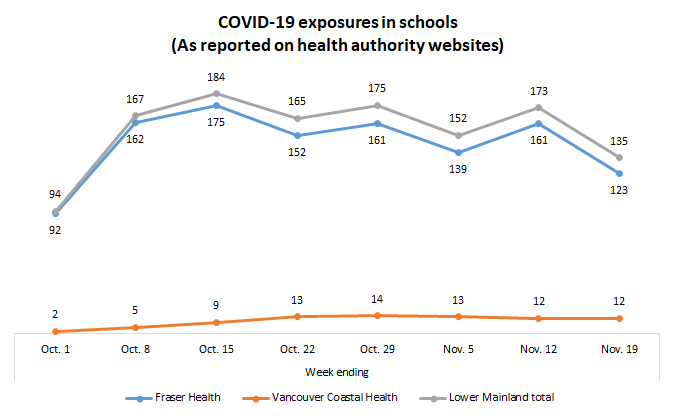 Notably, one of the schools listed on the Vancouver Coastal Health website is located on B.C.'s central coast, not in the Lower Mainland.

Of the other 134 schools on the lists, the vast majority continue to be in Fraser Health, where there were 123 schools listed as of Friday.

Schools are added to the lists when a student or staff member tests positive and officials believe there is a risk of ongoing transmission to other members of the school community.

Exposure notifications are not posted for every case of COVID-19 associated with a school community, and schools are not added to the health authority lists until after close contacts have been notified directly by public health officials.

Some schools in the Fraser Valley were closed for several days this week due to the catastrophic flooding and mudslides that struck the province.

Those closures may have prevented some schools from being added to the Fraser Health list this week, though there were still several schools in Abbotsford and Chilliwack on the list due to exposures that happened before the floods.

The lower number of exposures could also be a product of declining caseloads in the province. The rolling seven-day average for new cases in B.C. reached a three-month low this week.

On Friday, Health Canada approved the first COVID-19 vaccine for use in children ages five to 11, a development that will likely help reduce transmission of the coronavirus among that age group in the coming months.

Since September, children under age 12 have had some of the highest rates of COVID-19 transmission of any age group in B.C.

"We look forward to making the pediatric vaccine available for 360,000 young British Columbians as soon as possible," they said, promising details on the vaccine rollout for children under age 12 "early next week.

'Bewildering': Experts dispute Chinese officials' claim that mail from Canada may have brought Omicron to Beijing

Chinese officials have alleged that Beijing's first case of the Omicron variant may have travelled to the city through a piece of mail from Canada, but experts tell CTVNews.ca that the claim doesn't add up.

Ontario’s chief medical officer of health is sounding a tone of optimism nearly two weeks after the province instituted a modified lockdown to slow the spread of the Omicron variant.