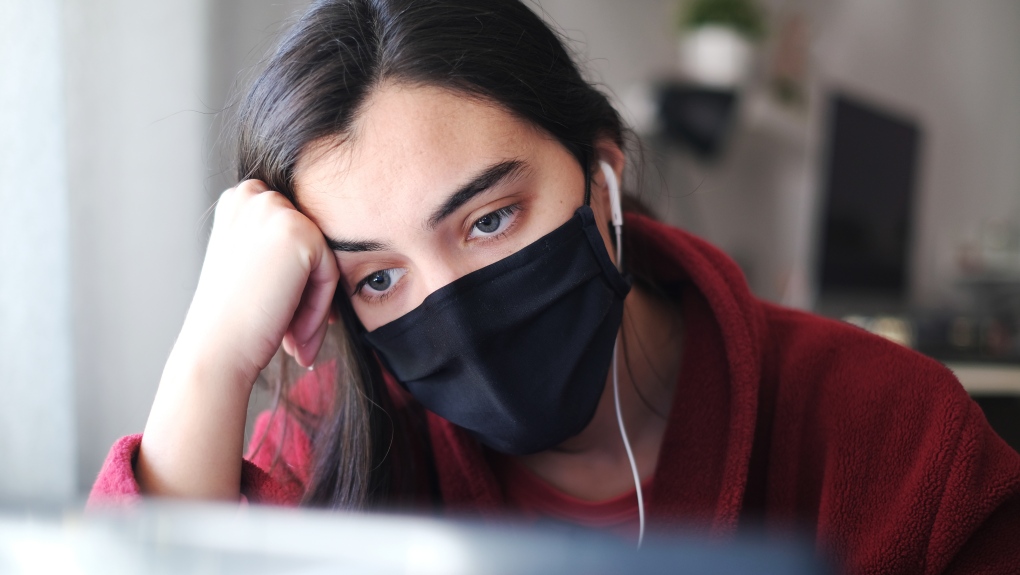 A person wearing a face mask is seen in this undated stock image. (Shutterstock)
VANCOUVER -

One in three Canadians are struggling with their mental health as the COVID-19 pandemic enters into its third year, according to a new poll from the Angus Reid Institute.

Researchers said that the picture of mental health in Canada is "one of exhaustion and increasing trauma" as more people reported feeling fatigued, frustrated and anxious since Omicron became the dominant strain of COVID-19 in the country.

Thirty-six per cent of Canadians reported that they have been grappling with mental health issues, up sharply from the one-quarter who said so in November, the Institute said.

Only one in 10 survey respondents chose "happy" and 23 per cent chose "depressed," the Institute added.

The data suggests that about three in 10 Canadians say they speak regularly about their mental health with friends and family.

But those conversations became more scarce among men aged 55 and older.

"Just 11 per cent in that demographic group say they talk to their friends about how they're feeling, while one-quarter (23 per cent) talk to family," the study reads.

However, researchers found that women between the ages of 18 and 54 were much more likely to have this type of discourse.

The study also suggests 66 per cent of those who have been struggling with depression and anxiety – or know someone who is – say that it has worsened during the pandemic.

These same trends are noted for those who perceive people in their social circle dealing with addictions and alcoholism, the Institute said.

The poll was conducted using a representative randomized sample of 1,509 Canadian adults who are members of Angus Reid Forum, and carries a possible margin of error or plus or minus 2.5 percentage points, 19 times out of 20.

A driver who struck and killed a woman and her three young daughters in Brampton, Ont., nearly two years ago is being sentenced to 17 years behind bars.

The Buffalo Police Department late Sunday released the names of the 10 victims killed in the shooting. Three people were also wounded.

The isolated state is one of only two countries yet to begin a vaccination campaign and, until last week, had insisted it was COVID-19-free.