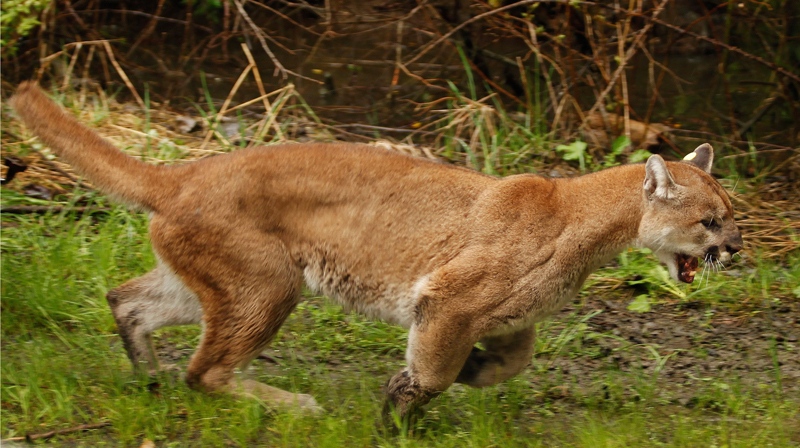 A cougar is seen in this file photo. (AP / The Daily Herald, Mark Mulligan)

VANCOUVER -- A cougar warning was issued in Coquitlam Friday after the city says there was at least one confirmed sighting of the animal in a residential neighbourhood.

The B.C. Conservation Officer Service believes the cougar likely made its way into the community through green spaces in the Chineside neighbourhood and Mundy Park.

"It's in a very residential area," said B.C. conservation officer Chris Miller. "It could be brought in by a food source, so raccoons, rats, that kind of thing, which are natural prey for cougars." The city is asking residents to keep attractants like bird feed, pet food and garbage inside to prevent prey species from coming into the neighbourhood.

In addition to the confirmed sighting, there have also been several "suspected" sightings, but so far, the cougar has only been active at night, which Miller said is natural behaviour for the animal.

"There's been no aggression towards people at this point," he said, adding that residents who see the cougar are asked to call the RAPP line <Link>, especially if the animal's behaviour becomes more confrontational.

The city is also asking residents to avoid walking their dogs at night, but if that isn't possible, to make noise and walk with a flashlight. House cats should also be kept inside and dogs should be on leashes at all times, the city said in a statement.

"In Coquitlam, generally, it's not unusual to see cougars, but once they kind of come that close down to Highway 1 in the area where it is, it's a little unusual," Miller said.

With the large population of bears in Coquitlam, Miller said it's possible the cougar was pushed out of an area by other predators. He added that it's not abnormal for them to be highly motivated by food and follow prey species like rabbits and racoons, which are typically found where people live.

"It's not uncommon for cougars to come into residential areas, but when they do, we certainly want to know about it," he said.

If people see the cougar, Miller says you should pick up any small children and put them on your shoulders, and you can also throw rocks or sticks at the animal to try to scare it away.

"Never turn your back, never run away. Don't scream," he said. "Just make yourself big. Identify yourself as a person, yell at it. Be very aggressive with cougars. Never break eye contact with them."