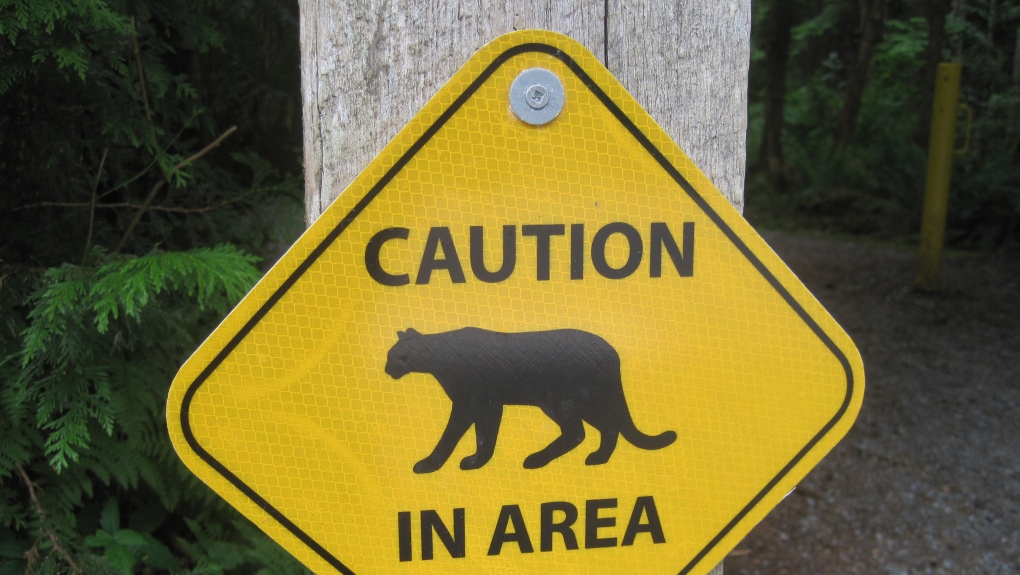 A sign warning of a cougar in the area is seen in this undated stock image. (Shutterstock)

A warning was issued by B.C. conservation officers after a cougar reportedly lunged at a man while he was walking his dog in a Kelowna park over the weekend.

The B.C. Conservation Officers Service posted details about the incident on social media Monday night, saying the man was walking in Mission Creek Regional Park at about 6:30 p.m. Sunday.

His large-breed dog was leashed and he noticed a cougar following him.

"The cougar then lunged and attempted to attack the dog but was scared off," BCCOS said, adding that nobody was injured.

Officers said they spoke with regional parks staff about the incident and placed warning signs in the park.

"While roaming pets are prey for cougars, aggressive behaviour towards a leashed dog is uncommon and concerning," BCCOS said.

Last year, conservation officers responded to nearly 2,300 calls about cougars across the province. In the Lower Mainland, two cougars were linked to a string of attacks on dogs. One, a young German shepherd puppy, was carried away by a cougar near Anmore last March.

Conservation officers monitored the area for weeks and said they witnessed an escalating pattern of concerning behaviour. Two cougars believed to be involved in the attacks were eventually killed by officers.

Conservation officers say anyone who encounters a cougar should stay calm, keep the animal in view and pick up any children. Officers then recommend backing away slowly, ensuring the animal has a clear way to escape. s

But if a cougar is following you, BCCOS says to maintain eye contact with the cougar, show your teeth, make loud noises and arm yourself with rocks or sticks as weapons.

Conservation officers remind anyone who spots a cougar to report the sighting by calling the province's Report All Poachers and Polluters (RAPP) line at 1-877-952-7277.