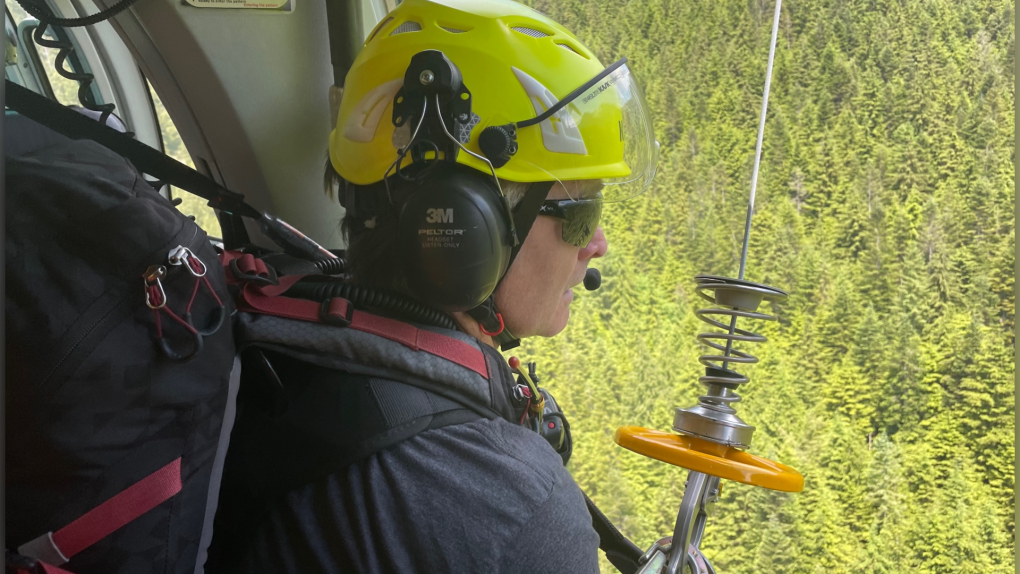 A badly injured hiker was hoisted to safety in Coquitlam over the weekend in a first-of-its-kind helicopter rescue for local crews.

On Saturday around noon, SAR members were called to Widgeon Lake in Pinecone Burke Provincial Park.

Al Hurley was the team leader for the rescue and says early reports were that a woman had a serious leg injury.

"It was a fairly serious medical call," he says. "The terrain is really steep. Lots of slippery logs, lots of water running so it's easy to have a slip and fall like she did and it was pretty gnarly where she was. The area is very steep with really thick timber, so spotting her air from the air was next to impossible."

After pinging the woman's cellphone and doing a ground search of the area, they saw the woman's husband waving for help. Another team member was lowered down to assess the woman's injuries and found she had broken her knee.

"She was amazingly composed, she winced a few times as we were moving her to put her into the rescue bag," he continues. "She handled it like a trouper."

Hurley says the rescue was different than the typical long-line rescue, with crews using a winch machine for the first time since being trained on how to do so. Hurley explains that in a long-line rescue, the SAR member is basically attached to a rope that is hanging from the helicopter.

"That's how we fly. We're always on the end of the rope, until we get to the rescue site," he says, adding the line can be anywhere from 150 to 300 metres long and often needs to be adjusted. In this kind of rescue, the helicopter lands nearby where SAR members and whoever they have rescued get on board.

In a rescue using a winch, everyone stays inside the helicopter until it arrives at the rescue site. Then, members are lowered down while the helicopter hovers overhead. Once the situation has been assessed and the person being rescued is ready to go, everyone gets hoisted back up.

"It was definitely a time saver for us to get on the winch and then to be able to hover right above our spot and pluck all three of us out," he says of the inaugural use of the winch technology.

Coquitlam SAR was activated for a hiker with a serious lower limb injury near Widgeon Lake around noon yesterday. Three of our rescue techs responded with Talon Helicopters AS365N2 Dauphin

Rescuers were hoisted into to the subject's location. pic.twitter.com/us4O02Bo8E