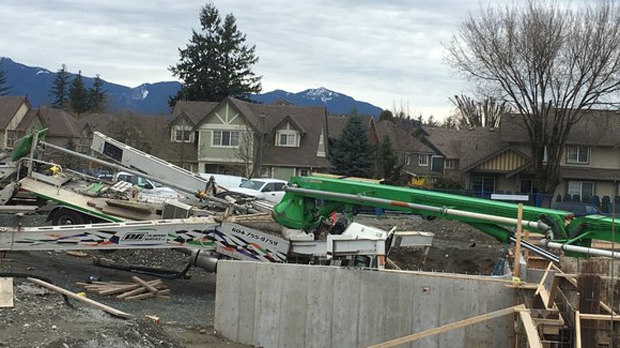 One worker is dead and another has been rushed to hospital after a construction accident in Chilliwack, B.C. March 11, 2016. (CTV News).

A man who was "catastrophically injured" when he was crushed by a cement-pumping truck at a work site has been awarded over $15 million in damages by a B.C. court.

The accident occurred in 2016 in Chilliwack and the judgment was handed down in B.C. Supreme Court in Vancouver Friday.

Gerson Alvarado was 26 years old and working as a supervisor on the job site, the court heard. When one of the legs holding up the truck's boom collapsed, it fell onto the men working below. Alvarado was paralyzed and his co-worker died.

"Prior to the accident, Mr. Alvarado was physically active, and regularly playing soccer in a men’s league. He and his spouse enjoyed various physical activities together. They were planning to have a family," Justice Michael Tammen wrote.

"Every aspect of Mr. Alvarado’s daily life has been adversely impacted by his injuries. He now endures almost constant chronic pain, as well as episodic acute pain. Once routine things such as bathing, getting dressed, and bowel movements have become time-consuming daily chores."

The company that manufactured the concrete pumping truck, KCP Heavy Industries Co. Ltd., never filed a statement of defence and was found liable. Tammen's ruling on damages outlines the extent and impact of Alvarado's injuries.

The most significant injuries, the court heard, were to Alvarado's spinal cord. Fractures to vertebrae in the middle of his spine mean that he is now a paraplegic, having lost all function below his sternum. He will have to use a wheelchair for the rest of his life. Despite the loss of nerve function, the court heard Alvarado suffers "neuropathic pain" which he describes as "intense burning sensations across his stomach, groin, buttocks and legs" that at times feel like "waves of electricity coursing up and down his body."

A second injury to his upper spine means he has some function above his sternum, but has also left him in pain that is "virtually constant, varying only in level and intensity," the judge wrote.

A number of other bones in his body were broken, his lung collapsed, his kidney and spleen were injured, internal organs were injured and he lost so much blood that he had to be "massively transfused" while being flown to the hospital in a helicopter, the decision said.

Alvarado had multiple surgeries, spending months in the hospital before being transferred to a rehabilitation facility. He returned home seven months after the accident.

"Mr. Alvarado has lost all ability to use his abdominal muscles, and requires assistance for almost all routine activities," the judge wrote.

The judge found the extent of his injuries entitled him to the maximum allowed "to compensate him for the pain and suffering caused by these catastrophic injuries" and awarded him $400,000 in non-pecuniary damages.

The court awarded Alvarado nearly $9.7 million for the cost of future medical care. Since the accident, the judge noted that Alvarado has been receiving approximately 2.5 hours a day in home care support, with his wife looking after him the rest of the time.

The judge agreed that a live-in caregiver would be the best option given the extensive list of tasks Alvarado requires assistance with, which includes bathing, dressing and undressing, meal preparation, attending to bladder and bowel issues, and overnight care. That expense comprised the bulk of the cost, but treatment by a physiotherapist, a psychiatrist, a urologist and a fertility specialist were also included.

"Mr. Alvarado has lost a great deal. No monetary damages can ever restore his mobility to him, nor his ability to care for himself," the judge wrote.

"The best a court can do is to provide for various care costs, including necessary treatment modalities and related expenses, in an attempt to restore some normality back into Mr. Alvarado’s life."

While Alvarado had been on an "upward career trajectory" prior to the accident, the judge found "he is no longer able to earn any income, and it is extremely likely that he will remain unable to do so for his lifetime" as a result of his injuries.

His chosen profession in a trade required manual, physical labour that he is now unable to perform, the judge noted. An attempt to go back to work for the company in a more administrative role after the accident did not work out, the judge finding that the combination of chronic pain and a lack of formal education meant Alvarado will not be able to get or retain a desk job.

The judge heard that Alvarado was a high-performing, valued employee at the time of his injuries. He agreed that it was likely if he continued working there or in the industry he would have been promoted and seen an increase in his wages.

The court awarded just over $3.6 million in lost wages, past and future.

Additional damages were awarded to reimburse WorkSafeBC for Alvarado's medical care, to reimburse the family for out-of-pocket expenses and to compensate Alvarado's wife for the many hours of unpaid care work she provided.