Aaron Smith always carries his camera with him on his commute through Mission, B.C., but the footage he captured this week of a colourful bear has turned into something of a local mystery.

Smith was driving past Silvermere Lake on Tuesday when he noticed the bear and her cubs. But he didn’t notice that the mama bruin had a rather unusual hue until he did a U-turn and picked up his camera.

“It was only after I pulled over and pulled out my zoom lens I saw that something was wrong with the bear’s head,” he said. “It was pretty crazy. It’s a very blue head.”

How the bear got so blue is a bit of a head-scratcher. People have suggested to Smith the bear could have set off a trap set with paint, or stuck its head into a Port-A-Potty treated with coloured liquid.

But conservation officers have another theory: They believe the curious bear dipped its head into a can of paint.

“Being that I see there’s a clear line on the bear’s neck of a saturation of blue, it looks like he would have dipped his head in something,” said Chris Jones of Mission Animal Control.

Jones says there are bear sightings in the area every few days, but this one is unlike any he’s ever encountered.

He says this bruin will likely be a town favourite: “It could be our new mascot,” said Jones.

“I don’t think anyone expects to see a blue-headed bear on their way home on the highway. Period,” Smith said. 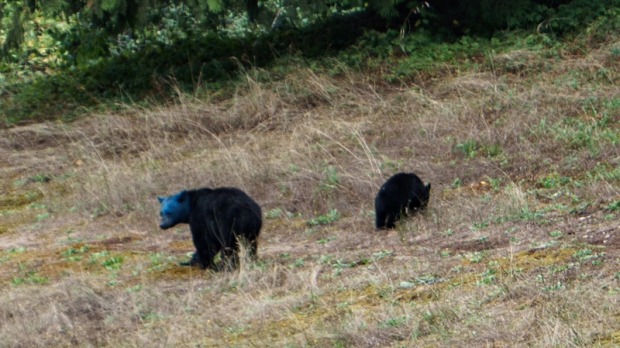