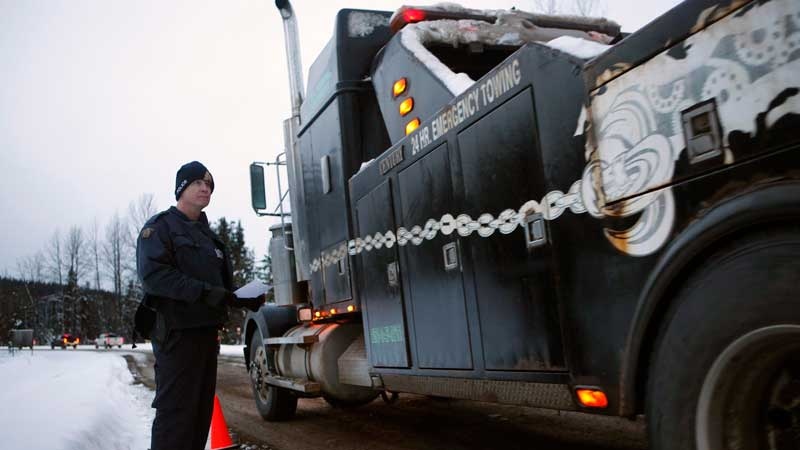 RCMP Const. James Spoor monitors contractors as they and representatives from Coastal GasLink proceed through the exclusion zone at the 27 kilometre marker towards the Unist'ot'en camp to remove barriers on a bridge over the Morice River, southwest of Houston, B.C., on Friday, January 11, 2019. THE CANADIAN PRESS/Chad Hipolito
VANCOUVER -

Canadian National Railway says it will not pursue criminal charges against protesters accused of defying an injunction and blocking a CN rail line in northwestern British Columbia nearly two years ago.

The BC Prosecution Service announced in April it was not in the public interest to pursue criminal contempt charges against protesters, but a B.C. Supreme Court ruling last month found CN could continue its own legal action.

In an email statement Friday, Canadian National says it is satisfied the injunction was “ultimately enforced” and the company “does not intend to pursue criminal or civil contempt against any of the protesters.”

The arrests occurred as demonstrations, including several rail blockades, took place across Canada in solidarity with Indigenous opposition to construction of the Coastal GasLink pipeline across hereditary territories in northern B.C.

An update posted by Coastal GasLink this week says construction of the 670-kilometre pipeline between Dawson Creek and the liquefied natural gas facility near Kitimat is 60 per cent finished, with completion expected by the end of this year.

Ten children in Canada were found to be suffering from severe acute hepatitis not caused by known hepatitis viruses over a nearly six-month period recently, the Public Health Agency of Canada announced Friday.

Russia's claimed seizure of a Mariupol steel plant that became a symbol of Ukrainian tenacity gives Russian President Vladimir Putin a sorely needed victory in the war he began, capping a nearly three-month siege that left a city in ruins and more than 20,000 residents feared dead.

Trudeau says government will do 'everything we can' to avoid U.S.-style formula shortage

A national substance use research organization is warning about a new type of opioid that is increasingly being found in Canada's unregulated drug supply.