Drivers in North Vancouver will soon face a different kind of sticker shock when they fill up at the gas station.

While warning labels have been on cigarette packages for many years, the City of North Vancouver is the first municipality in Canada that have committed to installing similar labels on gas pumps.

Instead of warnings about the dangers to personal health, the pump pictures feature messaging about the role gasoline production plays in climate change.

The city’s mayor and council have voted unanimously in favour of requiring the gas pump labels at its five gas stations.

Robert Shirkey of Our Horizon, the non-profit agency pushing for municipalities to adopt the climate change labels, says the idea is the “lowest cost climate change intervention in the world,” yet has the potential to be a powerful agent to change consumer behaviour.

“It’s in a similar vein to the tobacco labels that exist all over the world and those studies have shown have an impact on both behavior and attitude,” Shirkey told CTV Vancouver.

Some labels show pictures of wild animals alongside warnings about how climate change can put species at risk of extinction. In others, pictures of young children are alongside dire predictions that using fuel products contributes to smog, which can cause asthma and respiratory infections in young people. 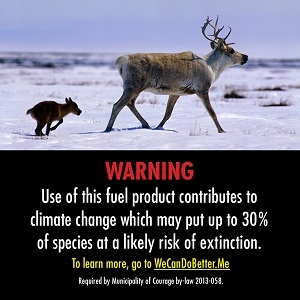 Mayor Darrell Mussatto said he wants to see the labels on local pumps as soon as possible.

“Certainly we want to be the first to get out there and support this,” he said.

A resolution will be brought before the Union of B.C. Municipalities in September asking that the provincial government make the new labels mandatory at all gas stations in the province.

“Wouldn’t it be wonderful if British Columbia became the first province in the world to actually require these? What an amazing example this would set for the world to follow,” Shirkey said.

Our Horizon says 50 communities across Canada support having the pump labels, and the idea is also being mulled by several U.S. cities.

With a report from CTV Vancouver’s Shannon Paterson