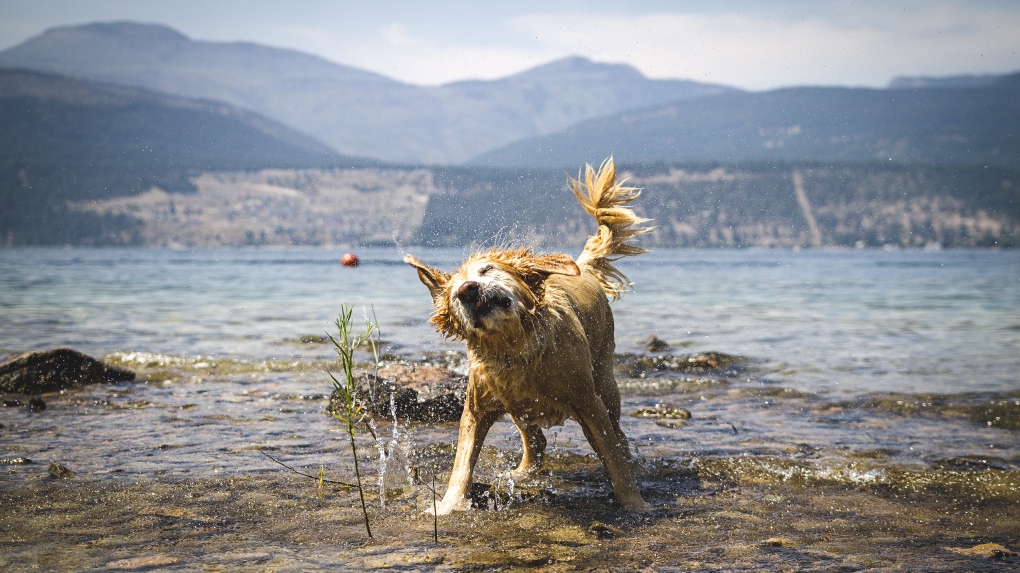 A golden retriever cools off in Okanagan Lake, near Kelowna, B.C., in an undated Shutterstock image.

A new report is highlighting the Canadian communities most likely to experience extreme and potentially lethal heat as the impacts of climate change are increasingly felt over the coming decades, including several in British Columbia.

But the authors stress that there are ways homeowners, tenants, landlords and developers can help avoid the worst consequences of that heat, something they hope will serve to alleviate the sense of hopelessness felt by many in the face of the global crisis.

The ever-growing list of extreme weather events reported around the world, from devastating wildfires to deadly heat waves, such as the one that claimed 595 lives in B.C. last year, has led to "a lot more reported eco-anxiety, or people worried about climate change," said report co-author Joanna Eyquem.

"By focusing on practical action, maybe we can empower people and they will feel less helpless," added Eyquem, the managing director of climate resilient infrastructure at the University of Waterloo's Intact Centre on Climate Adaptation.

The report focuses on three regions projected to be exposed to the most extreme heat between the years 2051 and 2080, based in part on the maximum temperatures and average length of heat waves already on record.

Low-lying areas between the West Coast and Rocky Mountains make up one of them. Kelowna was included in the top 10 at-risk metropolitan areas across the country, with Kamloops, Penticton, Vernon and Creston also named as examples of smaller B.C. communities facing dangerously high temperatures.

Among sizable Canadian cities, Kelowna recorded the highest temperatures, the highest number of days exceeding 30 degrees Celsius, and the longest average heat waves between 1976 and 2005, according to the report.

The other two regions are in the southern parts of the prairies bordering the U.S., and north of Lake Erie through the St. Lawrence River Valley in Ontario and Quebec – an area that includes Toronto, Montreal and several other major urban centres.

"That unfortunately coincides with most of where the population of Canada lives," Eyquem noted.

While people living in some of those communities could be used to hotter summers, and prepared with air conditioners, the authors cautioned against relying too heavily on electronics to escape excessive heat.

Were a serious heat wave to coincide with an extended outage that cut off residents' access to fans and air conditioning, the authors estimated the loss of life could exceed the already-high death toll experienced in B.C. last year, and "easily jump to the thousands."

"We might have people stuck in buildings who can't use elevators, who haven't got water because the water pumps … aren't working," Eyquem said, adding that backup power, cooling rooms and other measures could make all the difference in an emergency.

Their report outlines 35 practical actions that can help reduce the risk from extreme heat, ranging from offering support to vulnerable neighbours to retrofitting buildings with passive cooling systems that aren't reliant on electricity.

"We also include that if you're going to replace your air conditioner, get a heat pump that's more efficient, that you can use in winter and in summer," Eyquem said. "There's lots of actions that people can consider on their own."

The full report, "Irreversible Extreme Heat: Protecting Canadians and Communities from a Lethal Future," is available on the Intact Centre for Climate Adaptation website.