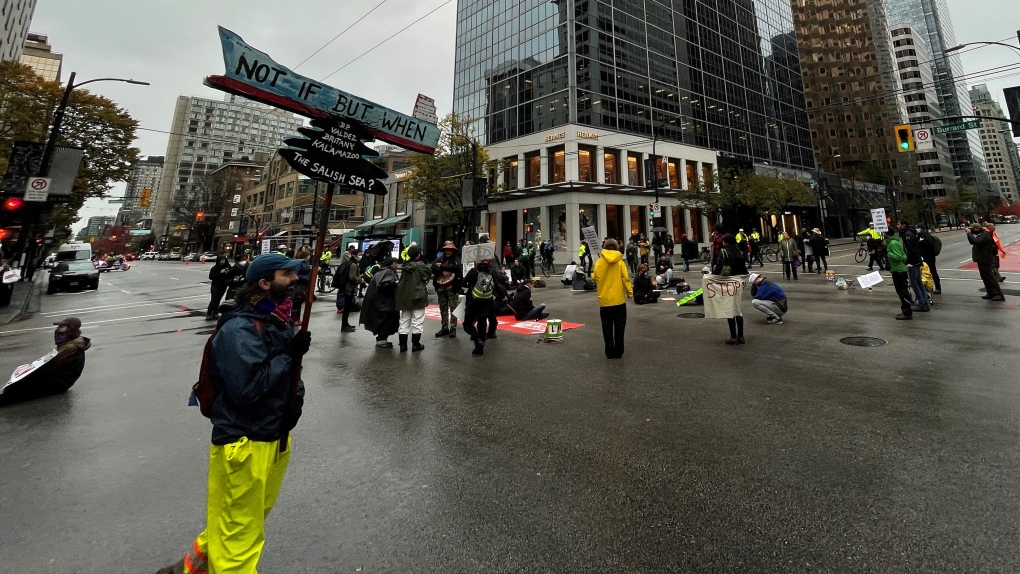 Members of the Extinction Rebellion are planning to block another downtown Vancouver intersection on Monday, following a weekend that saw several protesters arrested at similar demonstrations.

Organizers said they will be marching from Nelson Park to the busy intersection of Granville and Georgia streets around 4:30 p.m. as part of a two-week campaign of "constant disruption" intended to draw attention to the global climate crisis.

"With extreme heat, fires, droughts, and flooding affecting communities across the country, it’s become increasingly clear that we are facing a major catastrophe," Extinction Rebellion said in a news release.

"After decades of malfeasance and inaction by all levels of government in Canada and throughout the world, we now face a climate and ecological catastrophe that threatens human civilization."

The group has said every day of the campaign will focus on a different theme, with a common call for Canada to end all subsidies of fossil fuel projects. Monday's theme is "Protect the Sacred."

Nine protesters were arrested during the first two demonstrations. Police confirmed officers took two men and two women into custody at Saturday's "die-in" protest, which saw 13 people lay on the ground and block traffic at Georgia and Burrard streets.

Authorities said one man and four women were then arrested Sunday, when the group blocked the intersection of Broadway and Commercial Drive.

On Monday, Extinction Rebellion released a statement attributed to an unnamed arrestee explaining their reasons for joining the demonstration: "I realized that the government is taking advantage of our complacency to get away with murder."

"When planning my future, I wonder where I will be able to live safely because I have to consider food shortages, deadly heat waves, and wildfires," the statement said. "I can’t even consider having kids. They’ve already robbed me of my future. I have nothing left to lose in fighting back."