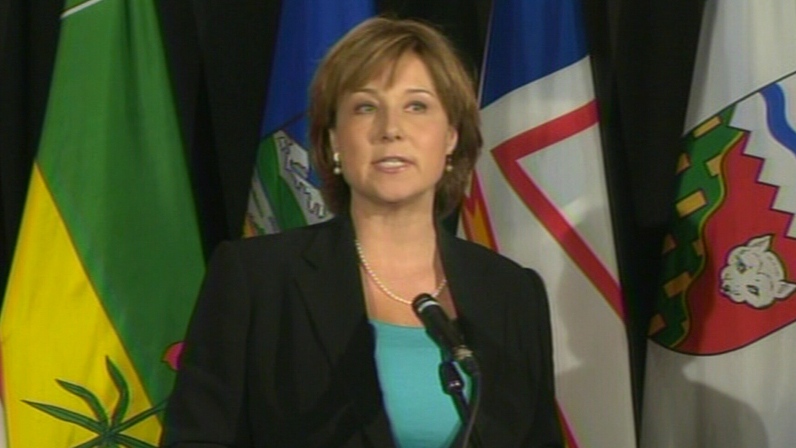 Speaking to a Vancouver Island economic summit, Clark said she's set lofty goals for B.C.'s economy, which include turning the province into Canada's No. 1 economy.

She drew mild applause from the business crowd when she said B.C.'s job creation numbers are currently tops in Canada, ahead of Alberta, and B.C. has done it without oil revenues.

"Fifty-seven thousand net new jobs in British Columbia, most of them are full-time," said Clark about the Statistics Canada yearly numbers. "We're ahead of Alberta and we don't even have oil. We're doing well."

Clark said her government's year-old jobs plan, which focuses on increasing trade with China and Asia and promoting mining and exploring innovations in technology and agri-foods, has resulted in growth.

Clark said trade with China has increased by 25 per cent and moves to clear up massive permit and approval backlogs in the mining sector has resulted in a 20 per cent improvement.

After her speech, Clark told reporters she wants British Columbians and Canadians to know that B.C. is ahead of Alberta when it comes to job growth.

She said she expects her province's employment efforts to be a deciding factor when British Columbian's vote in the upcoming May election.

"We're used to, in Canada, having Alberta doing better than anyone else because they have oil, which is great for the country and for Alberta, but I think it's significant for British Columbians to recognize that we are No. 1," said Clark.

"We are No. 1 in this country, and it should be a real source of pride that even without that great natural resource, and valuable natural resource they call oil, we're still doing better than everybody else," she said. "That's quite a challenge we've overcome."

"It's a good competition to have," she said.

Her recent Alberta meeting with Alberta Premier Alison Redford was described as frosty, but Clark said B.C. is sticking to its demand that the proposed $5.5 billion Northern Gateway pipeline project meet five conditions, of which three involve environmental safety.

Calgary-based Enbridge proposes to build a twin 1,100-kilometre pipeline from northern Alberta to northwest B.C., where bitumen from the Alberta oil sands will be piped to the northwest, B.C. port of Kitimat. The product would then be loaded on supertankers and shipped to Asia.

The pipeline project is currently undergoing a federal environmental review process, where many B.C. hearings have been dominated by opposition voices from First Nations, environmental groups and local citizens all concerned about the risk of a massive oil spill.

Clark's legal team has recently said they are concerned about the lack of detail of Enbridge's environmental preparations for the pipeline.

Clark didn't mention the Northern Gateway project in her Nanaimo speech, telling reporters later, "it was a long speech already."

Clark, whose Liberal government has often been criticized for paying lacklustre attention to Vancouver Island, said her government has supported the Island's economic and growth ventures, including airport and post-secondary education investments in Nanaimo and health-care in the Courtenay and Campbell River areas.

Opposition New Democrat Leonard Krog, who holds one of the two seats in Nanaimo, said Clark didn't make one new announcement during the speech, something the business leaders there will remember.