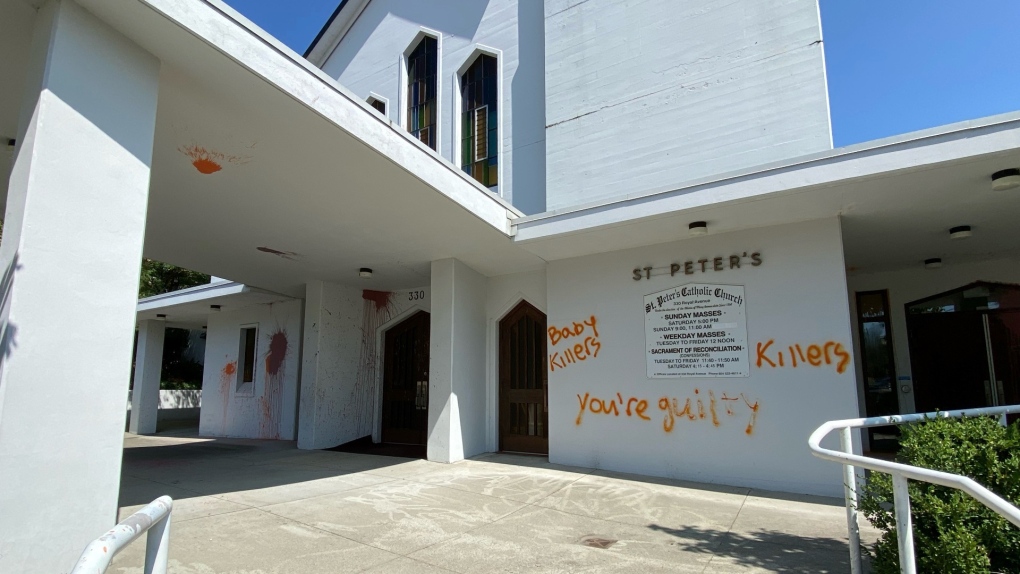 A church in New Westminster was covered in graffiti on July 25, 2021.
Vancouver -

Metro Vancouver police are investigating another act of vandalism after a church was covered with orange graffiti over the weekend.

New Westminster police said in a news release Monday that St. Peter's Roman Catholic Church, which is at Royal Avenue and 4th Street, was targeted on Sunday.

"We're working to find the people responsible for this and hold them accountable," said Sgt. Sanjay Kumar in a news release.

"We’re asking anyone who witnessed this vandalism or knows who may have been responsible for it to contact the New Westminster Police Department."

Last week, Vancouver police said its department had notice an uptick in vandalism of local churches in the past two months. Investigators in that city said they're looking into 13 incidents of mischief and vandalism at churches and church properties since June 2. Some of the reports include rocks being thrown at windows, graffiti and threats of buildings being set on fire.

At least six other churches in B.C. were destroyed or damaged by flames over the past several weeks. Mostly recently, a Surrey church was destroyed in what police are calling a suspicious fire. An Abbotsford church was also set on fire last week, though police have moved from describing that incident as arson to a case of mischief.

Some have speculated that the recent church destruction and vandalism could be connected to discoveries of unmarked graves at former residential school sites across the country as most of the schools were run by the Catholic Church.

The schools were known for overcrowding, poor sanitation, unhealthy food and menial labour. Harsh punishment was given to students who spoke their native language or took part in traditional ceremonies.

Investigators are hoping to speak with anyone who has additional information about Sunday's vandalism. Anyone with details or surveillance video from the area can call police at 604-525-5411.