VANCOUVER -- A Chilliwack mountain biker paralyzed from the chest down in a tragic accident in June is still in hospital.

But Doug Henderson's family says despite the obstacles he faces, he is determined to ride again.

“One day he knows he’ll be back in a bike. Even if it’s something he can operate with his arms or it’s electric,” his wife Tammy Henderson told CTV News.

The family shared video of Doug in hospital doing physiotherapy and working hard to get stronger.

“Dad doesn’t give up. It’s his new challenge, 110 per cent,” his son Chris Henderson explained.

Tammy said her 59-year-old husband developed a passion for riding a number of years ago.

“He lived mountain biking, riding in general," she said.

She’d finally bought her own mountain bike so she could join him. They went out for a ride June 23 in the Chilliwack Community Forest. He opted to do one final trail while she waited in the parking lot.

But on the way down, he hit a steep, muddy section, flew over the handlebars and ended up in a ravine.

He was found by a group of boys. 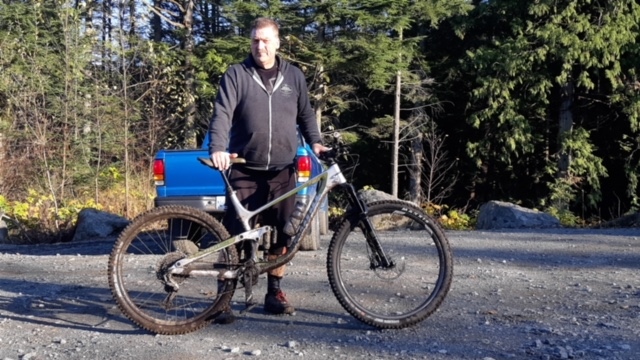 “They heard him calling and one of the children climbed down to him, removed debris out of his mouth, the others came to get me,” Tammy explained. The accident left him with a broken neck.

“All I know is that he’ll never walk again and we have a long road ahead of us,” his emotional wife said in an interview.

“I got a call from my mom. She sounded extremely panicked, distraught and I knew right away without even saying anything that something had happened with my dad,” Chris said.

“I knew it was bad but I was not prepared for the severity of the situation,” he added.

The community has been rallying around the family, offering emotional and financial support. A GoFundMe page has raised more than $23,000.

The family will have to sell their townhome and buy a place that is wheelchair accessible. They will also face additional expenses related to his ongoing care.

Tammy says the family is overwhelmed with the kindness of the community, including Vedder Mountain Bike Co.

“We just thank them so much, so much from the bottom of our heart,” said Tammy.

She is also grateful for the help of Chilliwack Search and Rescue on the day of the accident.

The family is looking forward to when Doug will be able to come home, but that isn’t expected to happen for many months.