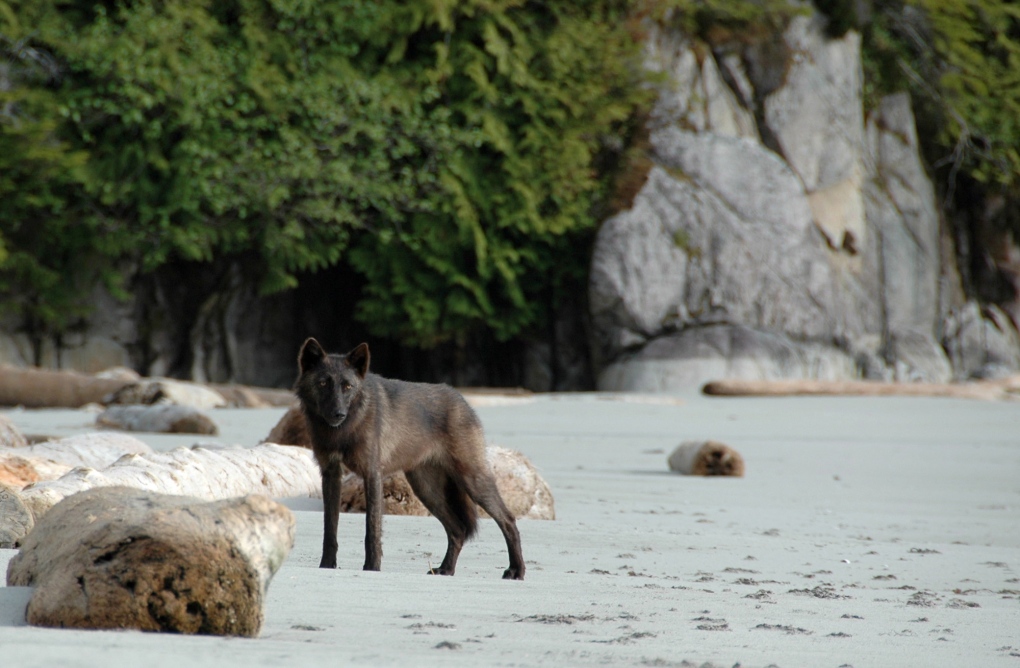 A coastal B.C. wolf, part of a research project, is shown in a handout photo. THE CANADIAN PRESS/HO-Chris Darimont

VICTORIA -- British Columbia has two breeds of wolves, the ferocious mainland animals that compete with grizzly bears for food and territory, and the laid-back island variety that prefers their terrain predator-free while scavenging the sea shore, says a new study out of the University of Victoria.

The often pastoral landscapes of many of B.C.'s ocean islands compared to the province's rugged, mountainous mainland has helped create what conservation scientist Chris Darimont said is a mellow breed of wolf -- one that digs for clams and snags salmon rather than spending its days roaming vast stretches of territory in search of food while competing with grizzly bears.

The study was conceived and initiated by the Raincoast Conservation Foundation starting as far back as 2001.

Darimont, a professor at UVIC and the research chair at the Hakai-Raincoast lab, said there are obvious differences between wolves on the mainland and those found on B.C.'s islands, even those located less than 1,500 metres from the mainland.

Darimont's research, published Monday in the British scientific journal BMC Ecology, states that despite the short distances between islands and the mainland, the wolves' different ecological environments has created a genetic separation that over time has seen the coastal wolves breed more frequently with each other than their deer-hunting, grizzly-loathing relatives on the mainland.

"I would say they are wolves living on the edge of the planet," Darimont said in an interview. "They are living life at the edge with two paws in the ocean and two paws on land."

Of course, the discovery that wolves living on B.C.'s islands are different than those on the mainland, was not news to Heiltsuk Nation hunter Chester Starr, who provided Darimont with the inspiration to study the wolves almost 15 years ago.

"We were sitting in a boat and he asked me the strangest question," said Darimont. "What wolves are we going to be studying here? The timber wolves or the coastal wolves?"

Starr and Darimont were about 45 kilometres north of Bella Bella on B.C.'s remote central coast in waters between an island and the mainland, when Starr matter-of-factly stated the differences between the wolves.

"The timber wolves, those are the mainland wolves," Darimont said Starr told him. "They like it up high. They like big things and they are big buggers themselves. The coastal wolves on the islands, they are different."

The scientists analysed DNA samples from wolf scat collected in the field, concluding there are differences between the wolves.

The journal reports: "Our results indicate the presence of a genetic cline between island and mainland wolves. Although overlap was extensive, the results suggest an east--west gradient in profiles across (less than) 30 kilometres."

The theory is that the contrast in food sources and geography influenced the genetic differences, the report states.

Darimont said the research is a reminder that although aboriginal and scientific approaches take different paths to knowledge, they're rooted in the same reality and provide complementary information.

"Across such a short distance, we can find striking ecological discontinuity between island and mainland wolves," he said. "This idea, hypothesis, comes from the observations of an indigenous man who spent the previous 30 years interacting with these wolves as he hunted and fished and did archeological surveys. Independently, he came up with this idea that was kind of ahead of its time in the scientific world because we didn't have the molecular markers to test for this genetic differentiation."

The research found that the farther island wolves live from the mainland the more their diet consists of marine foods, up to 75 per cent.

Darimont said wolves living on islands where they can swim to the mainland or other islands will eat a split diet of 50 per cent marine and 50 per cent land animals.

"It digs for clams," said Darimont. "They eat barnacles off of logs. You name it, they do it."