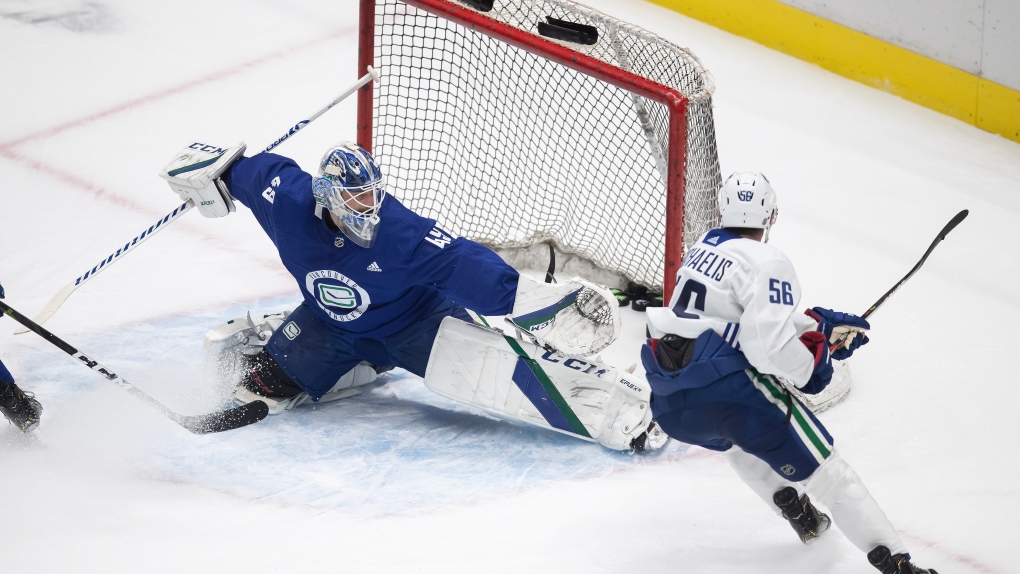 VANCOUVER -- He may have been a finalist for the NHL's rookie of the year award last season, but Quinn Hughes is already planning to take another step this year.

The Canucks lost several key players in free agency, including star goalie Jacob Markstrom, veteran defenceman Chris Tanev and sniper Tyler Toffoli, and Hughes knows there's talk that the losses will lead to Vancouver taking a step back this season.

It's chatter that he's using as motivation as training camp begins this week.

“That just means that other guys need to step up,” said Hughes, who had eight goals and 45 assists over 68 games in his rookie campaign.

Stepping up is nothing new for some on the team, the 21-year-old defenceman added, noting goalie Thatcher Demko's stellar performance in the playoffs after Markstrom went down with an injury.

“And this year we're going to need some other guys, with losing (Tanev) and Toffoli and some of the other guys. We just need guys to step up and take those roles,” Hughes said.

There's little time to integrate the new players and learn new roles, however, with the Canucks set to drop the puck on the new season against the Oilers in Edmonton on Jan. 13.

It's a quick start to a sprint of a season that will see 56 games played over just four months.

Demko said he's already clicking with Holtby, having spent some time chatting and in the weight room before camp began.

“He's been a great guy to get to know so far, really down to earth, really hard working, easy to talk to,” Demko said of the former Washington Capitals netminder.

“Obviously he's a guy that's been around, he's been to the top of the mountain. A lot of experience, a lot of respect for him. So just being able to soak in some of the things he has to share has been really beneficial for me.”

There may be some new faces in the Canucks locker room, but everyone understands what's at stake heading into the year.

Vancouver surprised some during its time in the Edmonton “bubble,” dispatching the Minnesota Wild and St. Louis Blues before being ousted from the playoffs by the Vegas Golden Knights in a seven-game series.

The bubble was a good experience in preparing for an unusual season where the Canucks will repeatedly face off against the six other Canadian teams, said left-winger Tanner Pearson.

“It's going to be exactly like a playoff series. You're going to become pretty familiar with the other teams pretty quickly for how many times we're playing them,” he said. “You always talk about the four-point games when you play a division team and now it's more crucial than ever.”

Last season, Pearson skated with Bo Horvat and the centre said the pair developed some good chemistry together. But who fills out the line this year remains to be seen.

Swedish forward Nils Hoglander was slotted in with the pair over the first two days of Canucks' camp this week.

Picked 40th overall by Vancouver in the 2019 NHL draft, the 20-year-old has had success with Rogle BK in the Swedish Hockey League.

Establishing those unique relationships won't be difficult under this season's unusual circumstances, added the Canucks captain.

“We're going to be together a lot,” Horvat said. “And I think there's no better way to get to know your teammate than being with him every single day, in the hotel room or having dinner beside the guy or whatnot.”

The trio's pre-existing chemistry could be an advantage heading into the season, Miller said.

“We already know a lot about each other. We don't have to find that in camp like we did last year,” he said. “We're all more mature players than we were the year before. And I think that's only going to be helpful for us as a hard to play against line.”

This report by The Canadian Press was first published Jan. 5, 2021.