Chartering a plane to jump the vaccine queue 'as un-Canadian as you can get,' B.C. premier says 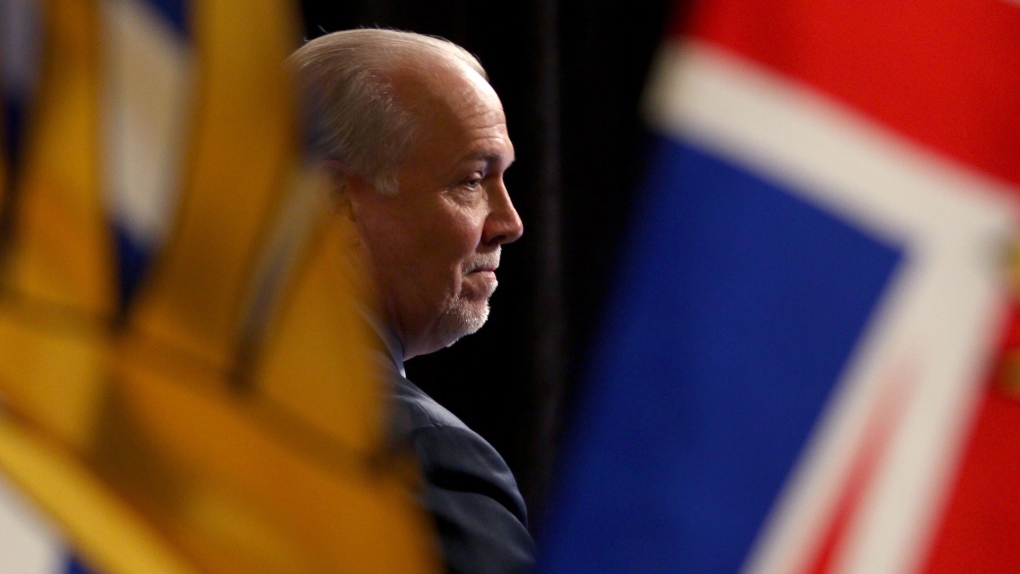 Premier John Horgan is joined by Provincial Health Officer Dr. Bonnie Henry and Health Minister Adrian Dix as they discuss reopening the province's economy in phases in response to the COVID-19 pandemic during a press conference in the rotunda at Legislature in Victoria, B.C., on Wednesday May 6, 2020. THE CANADIAN PRESS/Chad Hipolito

VANCOUVER -- B.C. Premier John Horgan said it was "profoundly disappointing" to learn a wealthy couple allegedly chartered a plane into a small Yukon community to jump the COVID-19 vaccine queue.

Horgan condemned the alleged behaviour Wednesday while imploring B.C. residents to fight through pandemic fatigue and continue doing everything they can to limit the spread of the disease.

He called the idea of flying into another jurisdiction to secure a vaccine dose ahead of vulnerable groups "about as un-Canadian as you can get."

"This is not the type of behaviour the vast majority of British Columbians would expect from their neighbours, from their loved ones, and it's the last thing I expect as the leader of a government," Horgan said.

"Those are the type of examples we want to put in our rear-view mirror as we celebrate the kindness and the goodwill of British Columbians towards each other, as we work towards the summer and the fall, when we can get back to normal. That's my hope."

Horgan also had strong words for other pandemic rule-breakers, including the Vancouver resident who allegedly turned his downtown apartment into a "makeshift nightclub" last weekend.

"We need people who are not paying attention to give themselves a bit of a shake and get with the rest of us, the vast majority of British Columbians who are making extraordinary sacrifices every day," the premier said.

"People are frustrated, they're angry, and when they see other people disregarding the very rules that they're trying to abide by, it's offensive to them. It's offensive to me."

Last week's incident in the Yukon raised questions about when people who manage to jump the COVID-19 vaccine queue are entitled to their second dose.

B.C.'s Ministry of Health issued a statement on Tuesday saying there is currently "no room" in the province's immunization plan for those who deliberately skipped the line.

"The pre-registration process will help ensure people wait their turn. The system will not allow people to book an appointment until their age category is eligible to pre-register for an appointment for the dose that they should be receiving," a spokesperson said in an email.

Yukon court documents obtained by CTV News show Rod and Ekaterina Baker were each fined a total of $1,150 for allegedly failing to self-isolate and failing to behave in a manner consistent with the declarations they made upon their arrival in the territory.

Yukon Community Services Minister John Streiker said a couple identifying themselves as living in Vancouver arrived in Whitehorse, chartered a plane to the community of Beaver Creek and then obtained doses of the Moderna vaccine by posing as local motel workers.

Enforcement officers caught up with the couple as they were waiting to depart from the Whitehorse airport later that day.

Horgan isn't the only B.C. official to speak out against the alleged behaviour. On Monday, provincial health officer Dr. Bonnie Henry said the individuals involved "should be ashamed of themselves."

"They put a community at risk for their own benefit, and that, to me, is appalling," Henry said.

A previous version of this story indicated the chartered plane went to Bear Creek. The plane was actually chartered into Beaver Creek, according to Yukon officials.