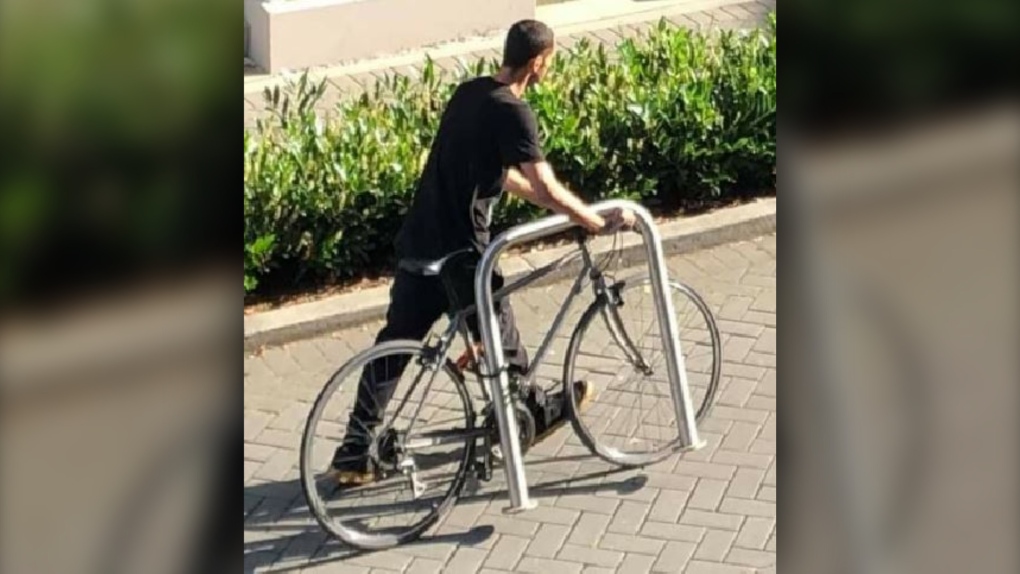 A bike theft suspect is seen carrying an entire rack down the street in Vancouver's Olympic Village neighbourhood on Aug. 14, 2020. (VPD/Twitter)

VANCOUVER -- Vancouver police are asking for the public's help identifying a suspect who was caught on camera lugging a bike and bike rack down the street last week.

Authorities said the bike was stolen from the Olympic Village neighbourhood on Aug. 19. Images shared on the Vancouver Police Department's Twitter account show a man carrying a bicycle that's still locked to a U-shaped bike rack.

Sgt. Aaron Roed told CTV News that having someone detach an entire bike rack is "very strange," adding that it's "unfortunate that they would go to these lengths."

Police did not speculate on how the suspect might have managed to remove the rack.

City staff said the rack captured in the images is not owned by Vancouver, and would have been installed on private property.

"In general, the city does its best to properly secure and maintain bike racks, and overall, we do not see an ongoing trend of bike racks being stolen," staff said in an email.

Vancouver police asked anyone with information on what happened to call the department's non-emergency line at 604-717-3321.

#VPD are investigation a bike theft that occurred in Olympic Village on August 19. Investigation is ongoing and we are asking for the public’s help to identify the suspect. Anyone with video or information of the incident, is asked to call VPD non-emergency line at 604-717-3321. pic.twitter.com/VVSTEXqG7z