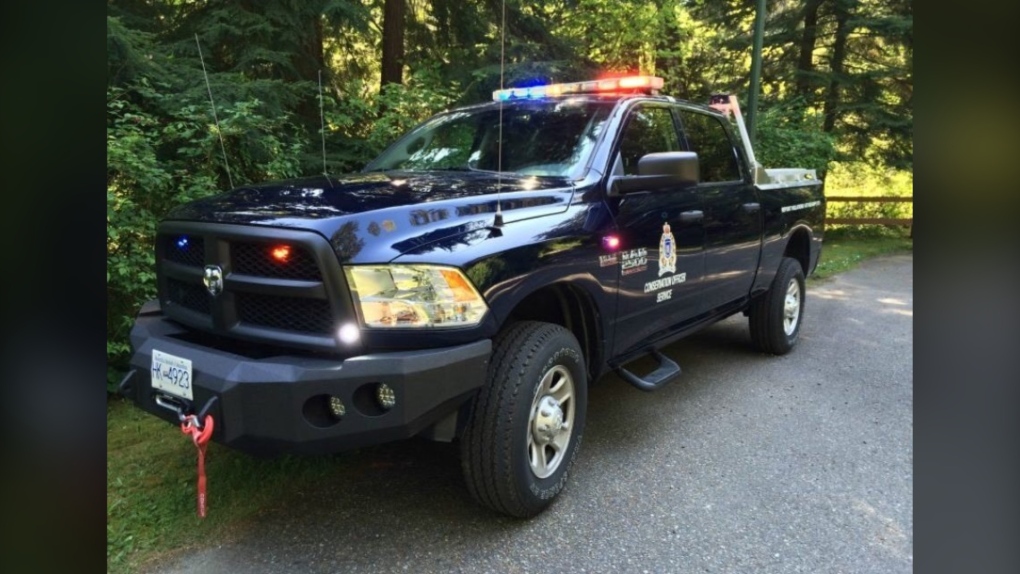 A B.C. Conservation Officer Service vehicle is shown in a photo posted by the service on Facebook.

A conservation officer said the recent arrest of a robbery suspect played out "just like out of a movie."

Ron Leblanc was in the right place at the right time in Smithers, B.C., recently, the provincial conservation officer service said in a social media post.

According to the agency, he and other officers had stopped to get a coffee before a long drive. They'd planned to head to a remote patrol cabin that day, the B.C. Conservation Officer Service wrote on Facebook Wednesday.

It was during that brief pit stop that they heard a call on their police radio about a robbery in progress.

Just two blocks away from the scene, the officers turned on their lights and sirens and joined the RCMP effort to patrol the area, BCCOS said.

It had been reported that the robbery suspect had held up a store, using a knife and a needle as weapons.

Police gave a description of the suspect, and the BCCOS officers saw a man matching that description a short time later.

It was then that Leblanc really got involved.

The service said the officer jumped out of the truck he was in and ran off after the suspect.

"It was just like out of a movie," he was quoted as saying.

"As he's running, the cash is falling out of his pocket as we're chasing him."

Leblanc and others caught up with the suspect, who was arrested and faces robbery and unrelated charges, BCCOS said.

It used the story as a reminder that conservation officers can carry out search warrants and enforce the Criminal Code just like police officers, as they too are armed law enforcement officials.

At least six people died and 24 were wounded in a shooting at a July Fourth parade in the Chicago suburb of Highland Park, and officers are searching for a suspect who likely fired on the festivities from a rooftop, police said Monday.

'He was a hero': Family says Ottawa man killed in fatal collision sacrificed himself

The family of an Ottawa man killed in a Canada Day crash in the west end says Tom Bergeron died exactly as he lived: selflessly thinking of others before himself.