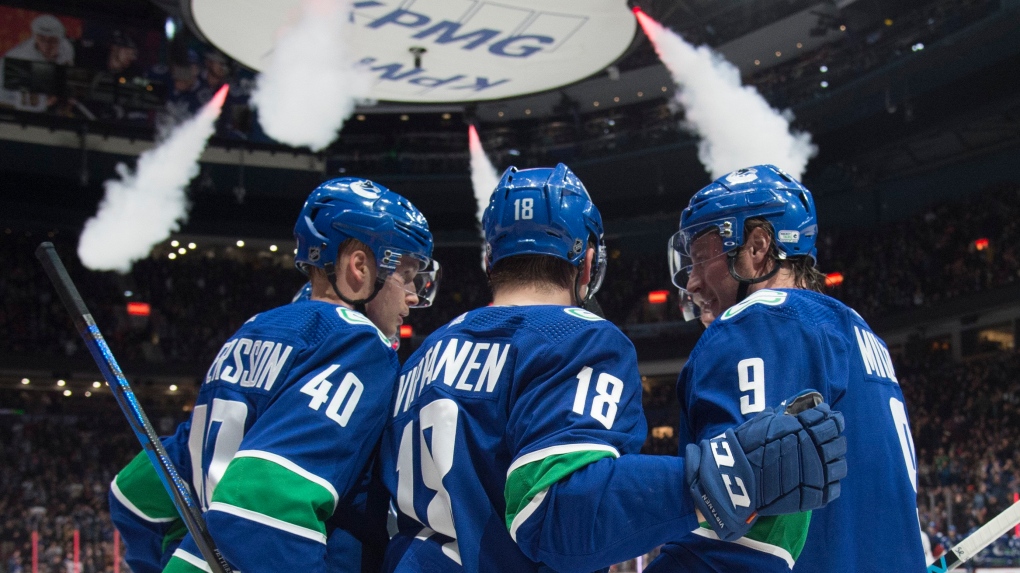 VANCOUVER -- For a few minutes Jake Virtanen thought he was back in the Western Hockey League.

Virtanen scored the only goal of the second period to reach a career-high 26 points in a season as the Vancouver Canucks defeated the Arizona Coyotes 3-1 Thursday night.

With the score tied 1-1, and the puck on his stick with just under five minutes left in the period, Virtanen thought he would use a move that worked when he played with the Calgary Hitmen.

Virtanen took a pass from J.T. Miller and swooped behind the Arizona net before backhanding a shot that hit goaltender Adin Hill's left skate and bounced into the net.

“I saw the goalie over commit a little bit,” said the right winger who collected his 14th goal of the season, one less than his career high set last year. “I took a took a quick glance up.

“In junior I used to do that wrap-around move. I thought I would try it out and it worked.”

“That goal was avoidable,” he said. “It's just a nothing play. We had the puck and that was the difference in the game.”

Elias Pettersson had a pair of assists for the Canucks while Pearson's goal was the 100th of his career.

In 48 games this year Virtanen already has more points than he had in 70 last season.

“It's nice (but) I don't really look at it like that,” he said. “I want to keep going and keep producing for our team. We want to make the playoffs, so what ever I can do.”

Vancouver's win made an already tight Pacific Division even closer. Arizona and Calgary are tied for first with 57 points. Vegas and Vancouver are next with 56, while Edmonton is one behind them.

“It's a game of inches right now in the standings and on the ice,” said Horvat, who has 13 points (six goals, seven assists) in his last nine games. “It's going to be like that from here on out. We have to keep wining hockey games if we are going to stay in it.”

Brandon Sutter said it was the kind of game a vegan wouldn't like.

“Tonight, there wasn't any two-on-ones or anything fancy like that,” said Sutter, who returned to the Vancouver lineup after missing four weeks with a back problem. “It was all pretty meat and potatoes out there. It was more like a playoff game. I thought we did a lot of good things.”

Canuck goaltender Jacob Markstrom, who made his 16th start in 18 games, stopped 34 shots. He made a big right-pad save on Jason Demers late in the third period to preserve the win.

Hill, making his third straight start, made 22 saves for Arizona.

Dvorak said the Coyotes must regroup before they play in Edmonton Saturday.

“I thought it was a pretty solid game here for us but there's no moral victories, especially at this time of year,” he said. “It's a tough one to lose.

“We were playing our game pretty much the full 60 (minutes) there and just couldn't really find the second (goal), which is tough.”

The teams were tied after the first period.

A defensive miscue set up the Coyote's opening goal at 7:59. When Vancouver defenceman Tyler Myers failed to clear a bouncing puck, Taylor Hall found Dvorak in front of the net. He scored his 12th of the season with a low shot to the far side.

Vancouver made it 1-1 on a power play at 15:01. Rookie defenceman Quinn Hughes boomed a shot from the blue line that Hill stopped only to have Horvat knock in the rebound.

The win was the seventh consecutive at home for Vancouver.

“I think, especially with a young team, there's something to be said about playing at home and being excited to play at home,” said Canuck coach Travis Green. “Eventually you want to have a team that plays well on the road and at home. But man, we've been we've been sharp here.”

NOTES: After Thursday the Canucks play 18 of their remaining 34 games at Rogers Arena. Vancouver is 15-5-3 at home and 11-13-1 on the road. The Canucks were outscored 22-14 while going 2-3-0 in their recent five-game road trip. Arizona goaltender Antti Raanta (lower body) practiced Thursday and could play against the Edmonton Oilers on Saturday.