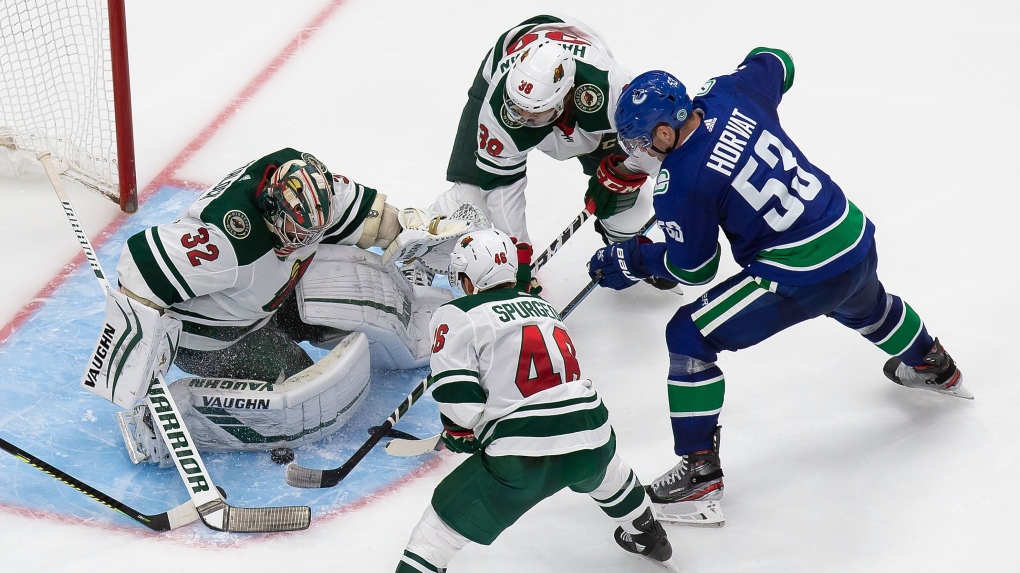 VANCOUVER -- Tanner Pearson's early goal eased the tension for the Vancouver Canucks en route to a 4-3 win over the Minnesota Wild in their qualifying series Tuesday.

The Canucks evened the best-of-five series at one win apiece with Game 3 looming Thursday.

The Wild silenced Vancouver's top scorers in a 3-0 win to start the series Sunday.

“We talked about 15 to 20 more per cent in this game and I think that up and down the lineup everybody contributed today.”'

Miller had a goal and an assist. Brock Boeser and Bo Horvat also scored for the Canucks, with Jacob Markstrom turning in a 32-save performance for the win.

Kevin Fiala produced a pair of late goals and Luke Kunin scored the other for Minnesota. Wild starter Alex Stalock made 24 stops in the loss.

Defenceman Matt Dumba continued to raise his right fist on the Wild's bench during pre-game anthems to bring attention to racism and social injustice.

The Canucks moved the puck with more authority in the second game of the series than the first.

“I thought they played a much better game tonight than Game 1, a little more jump in their step and it felt like we didn't have the puck as much,” Wild forward Zach Parise said.

The Canucks ranked 20th out of 24 teams in combined playoff game experience (480) coming into the post-season. Minnesota (609) ranked 16th.

Pearson, who won a Stanley Cup with the Los Angeles Kings in 2014, acknowledged playoff nerves in Game 1 might have caused the Canucks grip their sticks a little tighter.

“You get the first game under your belt and go into a second game knowing what to expect and kind of calm down a bit,” Pearson said. “It definitely showed.”

Minnesota was scoreless on six power-play chances, while Vancouver went 1-for-7.

“We were a step behind tonight,” Wild coach Dean Evason stated. “We didn't have that at the same emotional charge that we seemed to have. They did from the get-go.”

Canucks winger Antoine Roussel took a deflection in the head that drew blood five minutes into the third period. The forward didn't return to the game.

Fiala scored at both 17:32 and with eight seconds remaining in the game, beating Markstom with high wrist shots in both cases.

Horvat made good on one, getting his stick on a Quinn Hughes ice-skimming shot from the point to beat Stalock's glove at 6:22.

Vancouver was up 3-1 by 8:42 of the second. Boeser swatted in an Elias Pettersson rebound that Stalock couldn't control.

Miller scored Vancouver's second goal on a solo effort at 3:04.

He skated the puck out of Minnesota's zone, dragged the puck back and beat Stalock top corner with a quick release from inside the top of the face-off circle.

Kunin scored shorthanded with 2:44 left in the opening period to draw the Wild even. Parise dealt Kunin the puck from the far boards and Kunin beat Markstrom with a wrist shot.

Kunin was fined US$1,000 for unsportsmanlike conduct in Game 1. He'd delivered a whack to the leg of Vancouver's Micheal Ferland from the Wild's bench.

He'd fought Marcus Foligno off the opening faceoff in Game 1, which was just his second game since suffering concussion in December.

This report by The Canadian Press was first published on August 4, 2020.