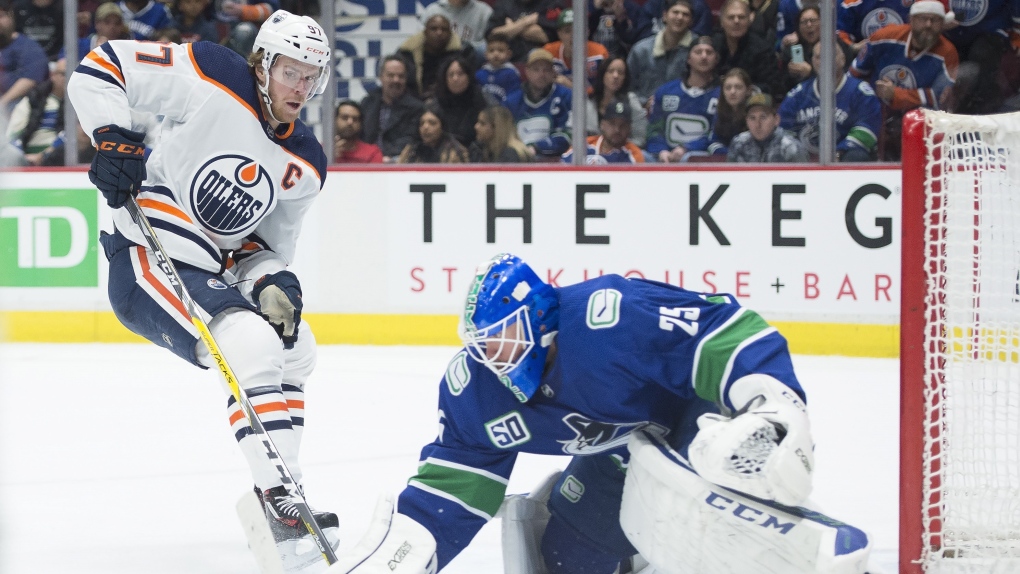 Edmonton Oilers centre Connor McDavid (97) fails to get a shot past Vancouver Canucks goaltender Jacob Markstrom (25) during third period NHL action in Vancouver on Monday, December, 23, 2019. When the NHL returns from its bye weeks and all-star break, there will be just over 30 games left for each team. THE CANADIAN PRESS/Jonathan Hayward

VANCOUVER -- As the NHL pauses for a few days for All-Star festivities, the Vancouver Canucks find themselves in an unfamiliar position: leading the Western Conference's Pacific Division.

With a 27-18-4 record, good for 58 points, the Canucks are just one point ahead of Edmonton, Calgary, Arizona and Vegas, but they're now the betting favourites to win the division, according to current odds offered by BCLC.

The odds of the Canucks claiming a division title in their 50th anniversary season are now listed at 4:1, meaning a $10 bet would return a total of $40. Those odds are slightly better than second-place Edmonton's, which are 4.4:1 ($10 would return $44). They're also significantly improved from where the Canucks started the season, when BCLC had them at 15:1 odds.

At 15:1, a $10 bet on the Canucks would return $150 if they hold on to the division lead for 33 more games. Roughly a third of preseason bets on the Canucks were for them to finish first in the Pacific Division, according to BCLC.

Vancouver's odds of winning the first Stanley Cup in franchise history this season have not improved quite so dramatically. BCLC's current odds for such an event stand at 22:1, down from 39:1 before the season started.

If the Canucks were to manage to win the cup, the 20 per cent of Canucks bettors who put money on them to do it would stand to collectively receive a "six-figure" payout, BCLC said.

Current favourites to win the Stanley Cup include the Tampa Bay Lightning, Washington Capitals, Boston Bruins and defending champion St. Louis Blues, each of which BCLC gives better than 10:1 odds.