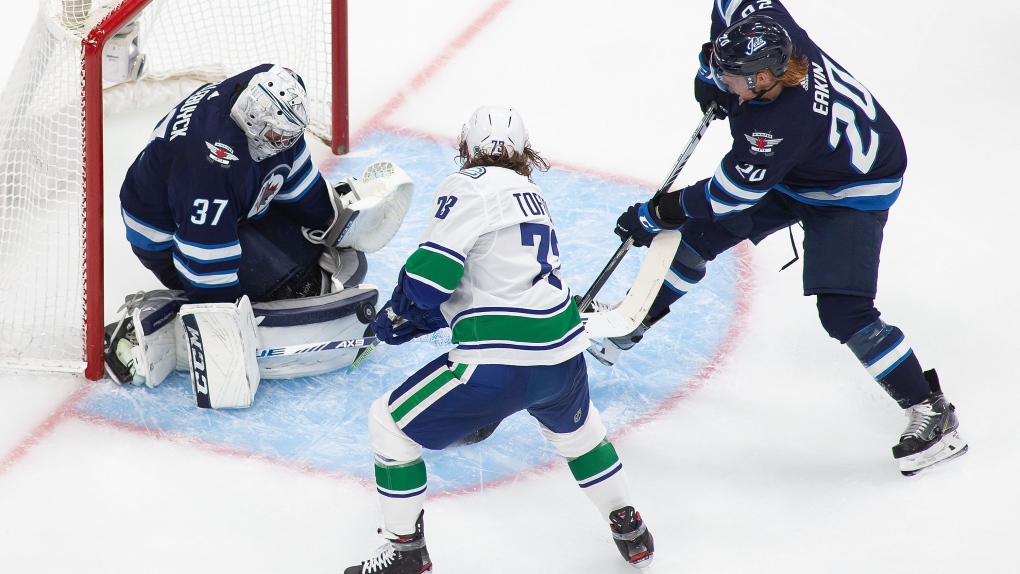 EDMONTON -- The Winnipeg Jets backed by the razor sharp goaltending of Connor Hellebuyck, overcame a sloppy first period to beat the Vancouver Canucks 4-1 in an NHL exhibition play Wednesday.

Hellebuyck batted away numerous one-timers from below the faceoff dot and stoned Canuck Brock Boeser on a breakaway to bail out his teammates before the Jets found their feet and wore down the Canucks and their goaltender Jacob Markstrom.

Hellebuyck, a Vezina Trophy finalist, stopped 37 of 38 shots while Markstrom turned aside 30 of 33, with one goal into an empty net.

“I thought it was great, being able to get to that playoff-battle mentality and that battle level,” Hellebuyck told reporters post game.

“This game was not just an exhibition for me.”

The Jets were outshot 12-7 in the first period, but opened the scoring with just over one minute left in the frame when defenceman Tucker Poolman fired a wrist shot just inside the blue line through heavy traffic past a screened Markstrom.

Markstrom was serviceable for the Canucks, but didn't get the help he needed as the Jets began to dominate the cycle in Vancouver's end in the second period to two add two more goals.

With just over five minutes left in the frame, Jet winger Patrik Laine blasted a shot in full stride on a two-on-one that Markstrom blocked, but allowed a juicy rebound that Nikolaj Ehlers buried into an open net.

Less than two minutes later, with the Canucks unable to clear the puck from their own zone, Jet Dmitry Kulikov jumped up in the slot, took a drop pass from Jack Roslovic and buried a shot through bodies stickside on Markstrom.

“After two periods I still felt like we had played a really good game and I didn't have that many looks (but) I felt a little off with some detail work,” said Markstrom.

“In the third period I felt like that was improving, so for me playing a full game helped me for sure.”

The Canucks finally got to Hellebuyck with just under seven minutes in the game, when Antoine Roussel poked one under his pads in a goalmouth scramble.

Jets captain Blake Wheeler dumped the puck into an empty net with 1:39 remaining as the Canucks pulled Markstrom to practise six on five.

It was a matchup of similar teams, both with explosive top-six forwards but patchwork defences that will need their goalies to excel if they want to go deep in the NHL playoffs, which begin Saturday with the play-in elimination round.

Hellebuyck lead all goalies with six shutouts in the regular season while facing a shooting gallery at times in front of defence that had to be retooled due to a number of departures, including Jacob Trouba, Dustin Byfuglien, and Tyler Myers (who went to Vancouver).

The Jets averaged 32.6 shots against per game, 25th in the NHL, before the regular season was halted March 12, around the 70-game mark, as the COVID pandemic gained strength.

Vancouver was worse, averaging 33.3 shots against (28th in the league). Markstrom played brilliantly in the regular season until he went down in late February with a knee injury. In his absence, the Canucks were 6-9-2 before the COVID shutdown.

It was the second night of exhibition play at Rogers Place, the hub city for 12 Western Conference teams vying to win the Stanley Cup while staying isolated from the public to prevent contracting COVID-19.

Toronto is hosting the 12 contenders from the Eastern Conference.

It was a fast flowing but not overly aggressive game. Players on both sides played hard but for the most part passed up opportunities to clobber or really fill in an opponent on the boards.

That was in stark contrast to the all-Canadian matchup at Rogers Place a day earlier, when the Edmonton Oilers and Calgary Flames pushed, scrummed, slashed, and facewashed each other up and down the ice while dropping high-decibel F-bombs that echoed in the near empty arena.

“I'm not going to lie, it was different obviously (with no fans in the stands),” said Canuck forward Bo Horvat.

“(But) it didn't take long for guys to get into it, for the intensity to ramp up, and that was just an exhibition game.”

The Jets, seeded 9th in the Western Conference with a 37-28-6 record, open their best-of-five elimination series against the Calgary Flames Saturday.

This report by the Canadian Press was first published July 29, 2020.