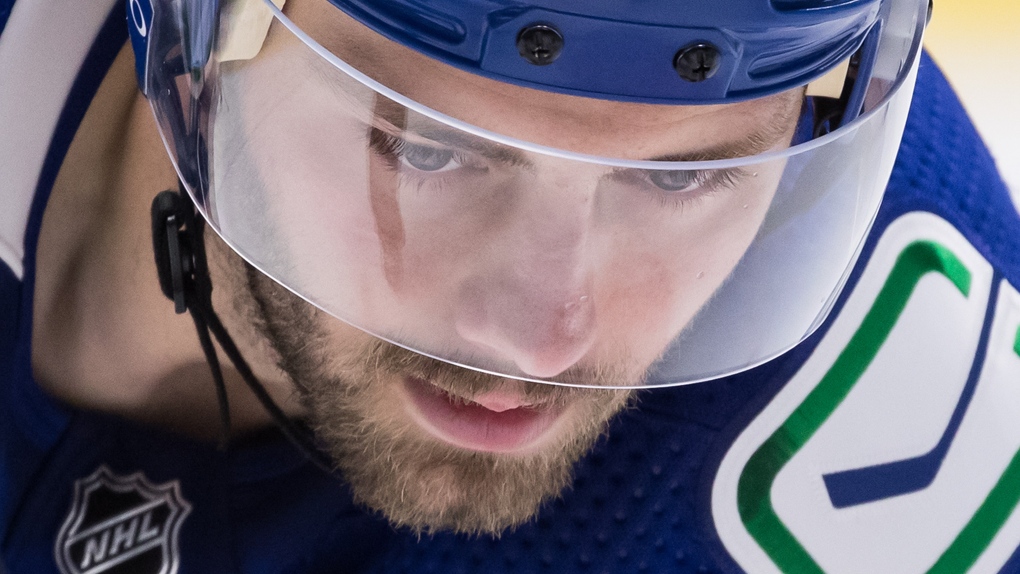 Vancouver Canucks' Jason Dickinson lines up for a faceoff against the Seattle Kraken during the second period of a pre-season NHL hockey game in Vancouver, on Tuesday, Oct. 5, 2021. (Darryl Dyck / THE CANADIAN PRESS)

Jason Dickinson isn't exactly sure where the feeling comes from.

The Vancouver Canucks centre has a burning desire - a need, really - to stand up for what he believes.

“I don't know,” Dickinson said after a long pause when asked about that personality trait. “I just do.”

The Georgetown, Ont., native stepped into the spotlight in August 2020 when he joined Vegas Golden Knights winger Ryan Reaves, who is Black, goalie Robin Lehner and then-Dallas Stars teammate Tyler Seguin, who like Dickinson are both white, in taking a knee during the American and Canadian national anthems inside the NHL's post-season bubble.

They were the first NHL players in uniform to kneel in support of social justice and equality, and the first to do so during the playing of O Canada.

“Black Lives Matter, equality, justice - you can pick the term, it doesn't really matter,” Dickinson said at the time. “Educate yourself, look into things, watch documentaries, talk to people.

“Just learn, try to open your mind a little bit ... this is a big issue that needs to be addressed.”

Acquired from Dallas for a third-round draft pick this summer before signing an three-year, US$7.95-million contract with the Canucks, Dickinson remains willing to voice his opinion in a sport where that's not historically been the case, including when it comes to COVID-19 vaccinations.

In the aftermath of taking that knee, however, he also experienced something new - vitriolic blowback, especially online.

“Social media is tough,” the 26-year-old said at last month's NHL/NHLPA media tour. “People are a lot more willing to speak up because they never have to face (consequences), necessarily. You have a lot of people that will voice some pretty outrageous opinions

“Pretty scary that some of these thoughts are out there.”

Scott Walker, who coached Dickinson in junior with the Ontario Hockey League's Guelph Storm, said his former player's stance on social justice, and how he went about expressing it, didn't come as a surprise.

“He didn't go out on Instagram the next day saying we should all be doing it,” said the former NHL winger. “He just does what he feels is right.

“He doesn't push his agenda on anybody.”

It's the same soft-spoken, driven Dickinson who helped push Guelph to the 2014 OHL title.

“His belief system is his belief system,” Walker said in a recent phone interview. “He just does what he feels is right, and doesn't need attention.”

And that's pretty much the approach Dickinson brings on the ice.

“Consistency, reliability,” he said of his characteristics as a player. “Not flashy, but I'm effective.”

The 29th pick at the 2013 NHL draft is also finely in tune with his strengths and limitations on a team that has the likes of Elias Pettersson and Bo Horvat above him in the centre pecking order.

“I'll create offence, but not necessarily a ton,” said Dickinson, who has 25 goals and 63 points in 225 regular-season NHL games. “I'm going to be the guy that gets put out there in a big penalty kill situation or the last minute when we need to protect our net.”

That responsibility in his team's zone is something he's had in his tool belt since minor hockey.

“I've always worried more about the defensive end first,” Dickinson said. “My dad, my coaches always preached that to me as I was growing up. It ended up coming natural.”

Walker described Dickinson, who he made captain of the Storm in 2014-15, as both “a quiet leader” and “a coach's dream.”

“Low maintenance, can play all the way up and down your lineup,” said Walker, who played parts of four seasons with the Canucks in the 1990s. “Where he slots in for Vancouver (to start) will be different from where we ends up in Vancouver. They'll be able to use them in so many positions.

“His hockey sense is elite.”

Canucks head coach Travis Green said he's noticed an unexpected level of maturity from a player with a relatively thin NHL resume - albeit one that does include 40 post-season contests with the Stars.

“He seems older than the games that he's played,” Green said. “He asks good questions, he wants to make sure he understands what we're doing, how we're playing, the type of system.

Growing up outside Toronto, Dickinson is ready for the roller-coaster of playing in a Canadian market.

“If you want them to love you (all the time), go to somewhere that doesn't understand the game.”

Walker has little doubt Dickinson, who's dedicated his time to charities in both Guelph and Dallas, will make his mark on and off the ice in Vancouver.

This report by The Canadian Press was first published Oct. 8, 2021.