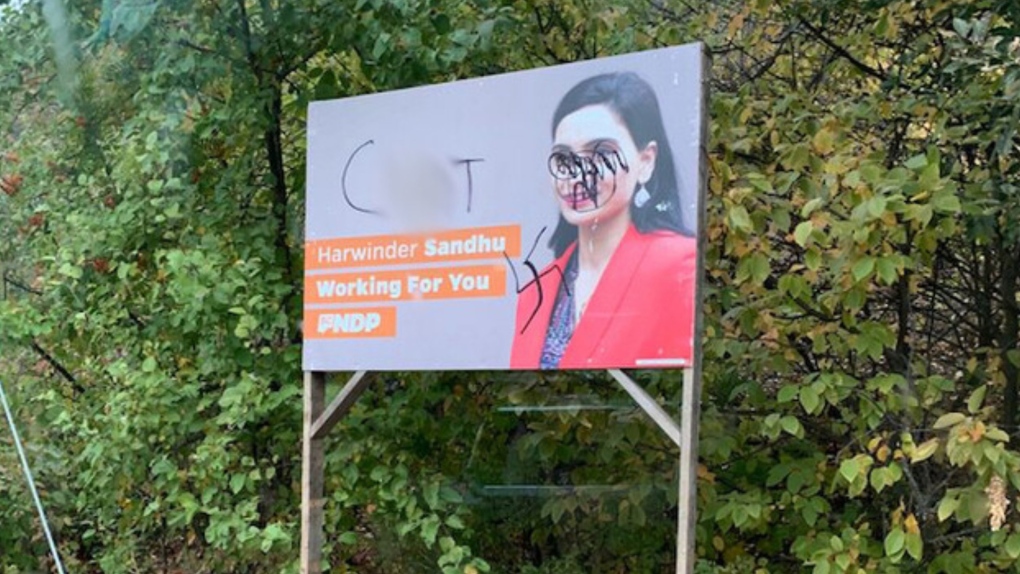 A campaign sign in B.C.'s Interior was defaced with racist and sexist graffiti Friday.

The large sign promoting BC NDP candidate Harwinder Sandhu on 27th Avenue in Vernon was found vandalized Friday morning, according to Castanet.

The vandal or vandals drew a swastika on the sign and wrote the word "cunt," a term often used to express hatred towards women, above Sandhu's name. They also scribbled over her face.

Sandhu told Castanet she's no stranger to racism and bigotry.

"I've seen some terrible targeting about my ethnicity, people openly asking if I was born in Canada," she said. "I always try to respond calmly, I have a thick skin. I have faced racism half my life."

Sandhu is far from the first candidate to have her signs defaced. Last year, during the federal election, police in North Vancouver opened a hate crime investigation after a candidate's sign was defaced with the words "no more Arabs" and "go home Arab."

During the 2017 provincial election, someone drew a swastika on a BC Liberal candidate's sign, also in North Vancouver.

And, in 2015, vandals affixed tin-foil hats to campaign signs for then federal Green Party leader Elizabeth May in her Saanich-Gulf Islands riding.

More recently, Surrey RCMP were called to investigate after windows were smashed Friday night at the campaign office of Dave Hans, the BC Liberal candidate for Surrey-Guildford.