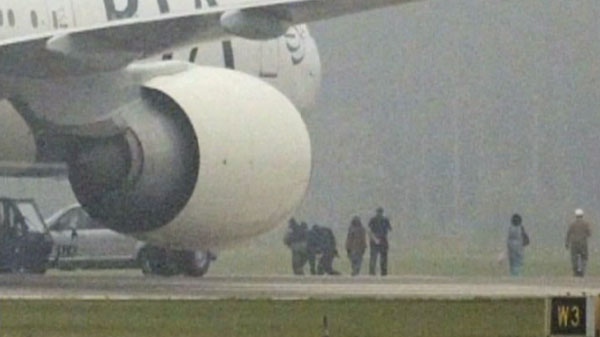 A Canadian man pulled off a Pakistani passenger jet flying from Toronto and detained over a bomb scare on Saturday was freed, but RCMP are now investigating to determine if a tipster should be charged with calling in a hoax.

A pilot of a Pakistan International Airlines Boeing 777 asked to land at Arlanda Airport in Stockholm after Canadian authorities received a tip that a passenger was carrying explosives.

Swedish police said the call was made by a woman in Canada, but after questioning passengers, crew and the suspect -- a 25-year-old Canadian national -- police deemed there was no threat.

"The man who was the suspect for the bomb case was released by the district attorney," said Ulf Lindgren a spokesman for Stockholm police.

"They couldn't find any crime done, therefore (they) decided to release the man and he's free to go where he wants."

Authorities are now working with the man to help him arrange a flight to Pakistan.

The plane landed on a reserved runway, which was closed off, and a bus escorted the remaining passengers to the terminal.

"This person (who) was wanted by the police for some reason, was taken off the plane and that was quite undramatic," said Jan Lindqvist, a spokesman for the airport in the Swedish capital.

He said the passengers on board were unaware of any threat, until they checked their mobile phones as they left the plane.

"They didn't know anything on board the plane. It was not until they landed that they (officials) said it was a security thing," said Lindqvist.

"They got the message that they had to go down for some technical reason."

The police scoured the plane and searched the luggage, but found no evidence of a bomb.

At around 4:30 p.m., the passengers boarded the plane again, which left for Manchester, England, where the travellers were expected to continue their journey on to Karachi.

In Ottawa, the RCMP said they have launched an investigation to probe the origins of the tip.

"There's an ongoing investigation related to the information to see whether it was deemed to be a hoax or not," said spokeswoman Sgt. Julie Gagnon.

"If the person who passed on that information was mischievous, then they can be charged with public mischief."

PIA said there were 255 passengers and 18 crew members on the plane.

Of the passengers, 102 were Canadian nationals, 139 Pakistanis, eight U.S. citizens, three Indians and one each from Japan, Malaysia, and Bangladesh.