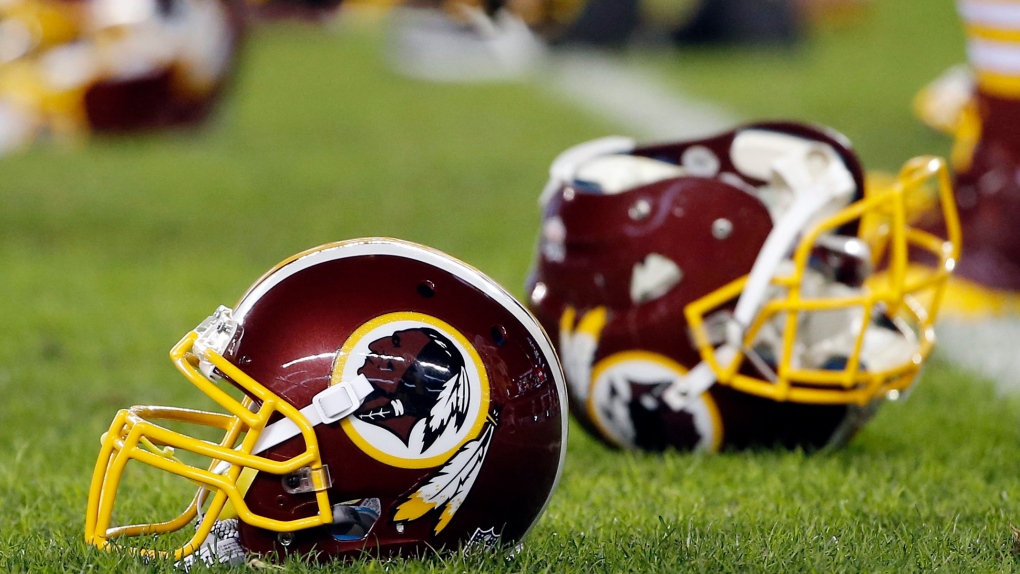 In this Dec. 26, 2015, file photo, a Washington Redskins helmet sits on the field as players warm-up before an NFL football game against the Philadelphia Eagles in Philadelphia. (AP Photo/Matt Rourke)

And according to a new poll by Angus Reid, more than half of Canadians say sports franchises that use Indigenous naming and imagery should not have to change, regardless of whether people find them offensive or not.

However, more than four-in-ten people, especially young women and people with a university education, say those teams should make proactive changes, protecting cultural traditions from misuse or offensive, caricature imagery.

The recent survey comes on the heels of the 70-year anniversary of the Canadian Football League’s Edmonton Eskimos.

Thirty per cent of Canadians polled say they do have concerns with Edmonton’s team name; the term “Eskimo” was replaced by “Inuit,” the proper Inuktitut word used by the Indigenous communities of northern Canada, meaning “the people.”

Canada officially recognized the Inuit peoples in the 1982 Constitution Act.

The CFL franchise has been speaking with Inuit communities about the impact of the team’s name for several years, but say they have no plans to change the name.

For many, the discussion about the use of Indigenous iconography in sports depends on the intensity of perceived insensitivity, says Angus Reid.

More than 40 per cent of respondents say that either the name or the logo of both the Washington Redskins National Football League franchise and Major League Baseball’s Cleveland Indians and their former mascot “Chief Wahoo” are troubling. That number drops to under one 25 per cent in reference to the Atlanta Braves baseball team and the NFL’s Kansas City Chiefs.

The Indians’ former mascot, a caricatured version of an Indigenous person, no longer appears on the team jerseys as of 2019, and has been removed from almost all merchandise from the team’s official online store.

More than half of people polled agreed with McGill University’s decision to drop the name “Redmen” for its male sports team, and as the Angus Reid Institute notes, the discussion surrounding offensive imagery and names is not limited to Indigenous peoples and culture: as many Canadians polled took issue with the logo of the Notre Dame Fighting Irish as they did with the Braves and Chiefs.

The poll used 12 logos from college and professional teams in North America, including the Vancouver Canucks, who use an orca whale inspired by traditional Haida artwork.

Only four per cent of Canadians polled took issue with the orca logo.

The Angus Reid Institute conducted the online survey from April 18 to April 23, 2019, using a randomized sample of 1,544 Canadian adults, all whom belong to the Angus Reid Forum. The pollster says a probability sample of this size would carry a margin of error of +/- 2.5 percentage points, 19 times out of 20.