Burnaby North-Seymour: Competitive, diverse battleground with pipeline at its centre

Burnaby North-Seymour spans Burrard Inlet, capturing parts of both Burnaby and the District of North Vancouver, linking neighbourhoods like Capitol Hill and Burnaby Mountain on the south side, to Seymour Heights and Deep Cove in the north.

At the centre of the riding, the terminus of the Trans Mountain pipeline, which Ottawa nationalized in 2018, and whose well-underway expansion was approved by Prime Minister Justin Trudeau and the Liberal government in 2019.

Liberal Terry Beech has won two elections here, the first after the riding’s creation in 2015, when he bested the NDP’s Carol Baird Ellan and the Conservatives’ Mike Little.

Heather Leung was dropped by the Conservatives before election day, and came in a distant third, with 19.4 per cent of the vote.

Now, Beech faces a challenge on the left from Jim Hanson, a personal injury lawyer and two-term District of North Vancouver councillor.

On the right is political newcomer Kelsey Shein, an entrepreneur who runs a small business in North Vancouver.

The Green Party’s is running Peter Dolling, an environmental consultant.

And the People’s Party of Canada candidate is Brad Nickerson, a risk management and insurance professional.

The Green and People’s Party candidates in 2019 received 9.6 per cent and 2.2 per cent of the vote, respectively.

CTV News spoke to the Liberal, NDP, and Conservative candidates about the issues that matter to them, why the pipeline is still on their minds, and the message they hope makes it through to voters.

The candidates’ answers have been lightly edited for brevity and clarity. 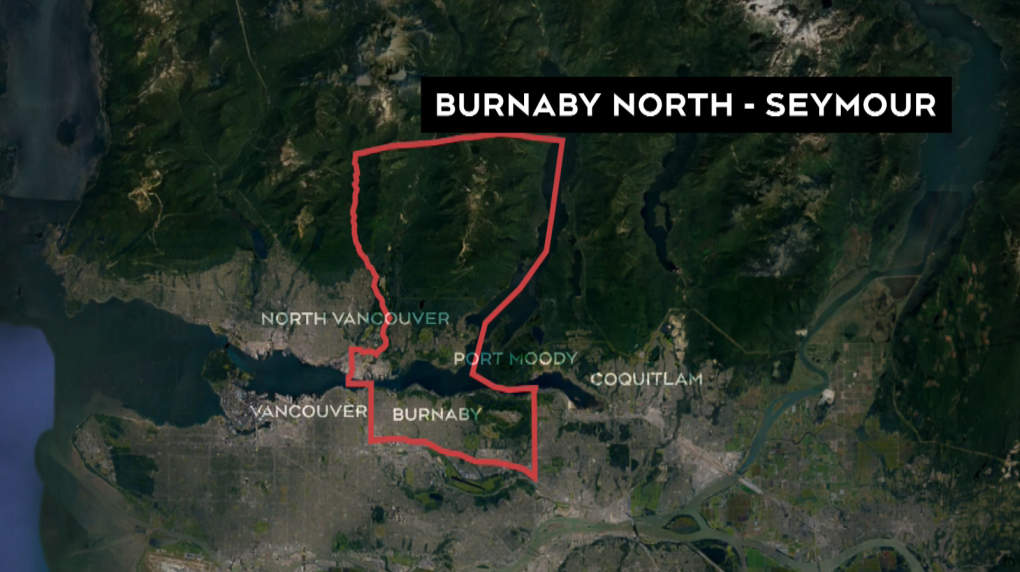 CTV News: How would you describe Burnaby North-Seymour and the people who live here?

Jim Hanson, NDP candidate: I’ve been out on the door steps. I’ve talked to hundreds of voters over the last three weeks. I’d say this riding is very diverse.

Kelsey Shein, Conservative candidate: I’ve spent the last three or four months knocking on doors every single day, so I’ve really gotten to know people. They are good hard working people. We have small business owners. We have working class folks. I know it very well because we own a small business on the North Shore and I grew up in Burnaby.

Shein: I am a grassroots advocate, I am a small business owner, and I am a proud Metis woman. When I talk to people at their doors, they are deeply concerned about the direction of the country, as am I. And Canadians are looking for a plan. And I think our party has a plan to secure our future and put us onto the right path.

Shein: Housing and health-care. People bring up housing because not only are they concerned for themselves, but they’re concerned about their children and our future. I think we need a plan to get our supply under control, so that we can create a future where everybody has the opportunity to live and work and own in our beautiful community.

With health-care, I think we have some significant gaps that have been displayed in this pandemic. We need to take leadership on mental health, and the Conservatives will do that.

Beech: The four things that I hear about most regularly are: affordability, climate change and protecting the environment, making sure that we’re growing the economy, and of course all the issues that we’re facing with the COVID-19 pandemic.

Hanson: Climate change and secondly, affordability, especially housing affordability. During the Trudeau government, the cost of housing has risen 50 per cent in this community. And we’re now at a crisis stage, we’ve been here for a number of years.

Beech: I think this election is about the direction Canadians want to go. We put forward a plan to move forward for everyone. I personally got into politics because I wanted to make sure people had a fair and equal chance at success.

Shein: This election is about the future. And this election, I will say, from my personal perspective as a Metis woman, is also about reconciliation. We need real action on reconciliation because it is too important for the people of this country to live with the national shame that we have no access to clean drinking water on reserves. We need to do better and we have a plan to do so.

Hanson: I stand out because I have the experience as a district councillor and three decades as a lawyer fighting for people against corporations and governments. I look forward to fighting for this community in Ottawa.

Shein: When Erin O’Toole was first elected as leader of Canada’s Conservatives, he said in his very first speech that he wanted to see more young people, more women, more Indigenous people run and see themselves in our party. And I felt that as a personal call to action. Reconciliation is not only a talking point for me. It is my duty and it is in my blood as a Metis person.

Beech: I’d say I’m one of the hardest working parliamentarians in Canada. I won parliamentarian of the year back in 2019. I’ve spent six years knocking on doors, and making phone calls, and the people of this community have really invested in me, and I haven’t taken that for granted.

Shein: I think Burnaby North Seymour is an interesting three-way split. For me, when I talk to voters, they are deeply looking for a change. So, I am doing everything I can to run a positive campaign, sharing our vision.

Beech: The NDP has always done well, but the riding has always been held by the Liberals or the Conservatives. The way the dynamics work is if the NDP bumps up, the Conservatives might be able to come up the middle having the vote split. It’s always been a tight three-way race, but I don’t really focus on that. I focus on my positive message and the contribution I want to bring to this riding. And I’ll continue to focus on that in this election.

Beech: Before I was a politician, I ran a non-profit that taught high school kids how to win scholarships to attend university. I was an entrepreneur. I was an educator, I taught business and finance at SFU and UBC. I came from a family where my father was a janitor, and we didn’t have much money, and grew up in a Canada that invested in me. I want to make sure that our country fulfills that promise and that everybody in our riding has the same opportunities that I had as a kid growing up.

Hanson: Jim Hanson is a perfect (choice) with the experience – the life experience, the political experience – to come forward and make a difference for positive change on the issues that matter: housing and climate change.

CTV News: The Trans Mountain pipeline expansion was approved in 2019, and construction is well underway. How does that figure into this election, and what’s your position on it?

Shein: People are upset that Prime Minister Justin Trudeau bought the pipeline. They feel lied to and they feel betrayed. I hear this consistently from people on all sides of the spectrum. If this pipeline is safe and can get our resources to market, I could support it.

Beech: I’m one of two members of parliament in the Liberal government that voted against the pipeline, because I said that I would represent the views of our community, not the views of Ottawa.

People in the community are now worried about climate change, about the ocean spill response plan and ocean protection. Our west coast is now more protected than it’s ever been. They’re also worried about the fire and emergency response on Burnaby Mountain where the tank farm is. I made an announcement recently with the fire chief and mayor to open a new fire hall right next to it. I’ve been working hard on the underlying ramifications of the expansion.

I also wrote up a 25-page position paper that reflects the views of my community. And to fully answer that question, I’m not into bumper sticker political, I would suggest that my constituents read that position and read about my work that I’ve done over the last six years on this issue. Because nobody in this country has worked harder on this issue than me.

CTV News: What’s the one thing you want undecided voters to know about you?

Shein: I am not a career politician. I am a concerned Canadian, who is worried about our future, I share your concerns and I think enough is enough. I think our country deserves better and I want to put us on a path to recovery.

Hanson: That I will be true to my promises.