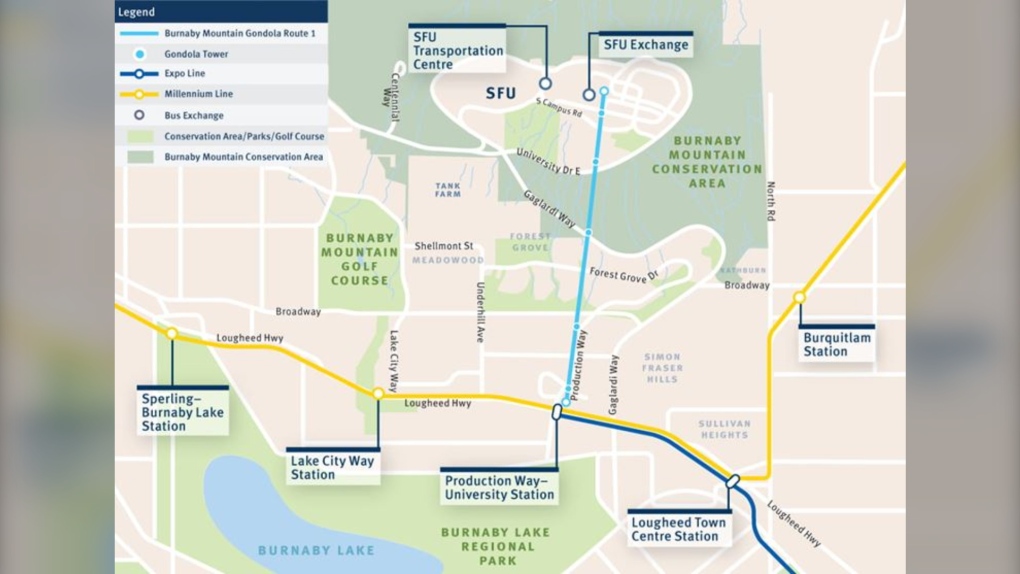 A map of the proposed Burnaby Mountain Gondola as seen on the TransLink website.

Supporters of the proposed gondola between a Burnaby SkyTrain station and the Simon Fraser University campus gained another ally this week.

The Burnaby City Council has endorsed the proposed Burnaby Mountain Gondola, favouring the so-called "Route 1" option that would see the gondola run directly from Production Way-University Station to SFU, over the city's Forest Grove neighbourhood.

A survey conducted for TransLink in 2020 found that, while most respondents supported the gondola proposal, many residents of Forest Grove were not.

In a news release announcing the council's endorsement of Route 1, the city stressed that none of the five towers required for the proposed route would need to be built in the neighbourhood.

“The Burnaby Mountain Gondola project will create a safe and reliable transit option for Burnaby residents travelling to and from Burnaby Mountain," said Burnaby Mayor Mike Hurley in the city's release.

"By taking cars and buses off the road it will be one of the many changes we must make in our city to achieve the aggressive targets we’ve set for reducing carbon emissions,” he added. “Before endorsing this project, council stressed the importance of consultation with residents, businesses and First Nations, and we expect that dialogue to continue should this project move forward.”

SFU and the Simon Fraser Student Society have also endorsed the project, for which they've been advocating for years.

In a statement Friday, the SFSS lauded the city council's decision as "a massive win."

"After a decade of advocacy from the student body, we are able to celebrate and look forward to the positive impacts this will have for students, the SFU community, and Burnaby as a whole," said Matthew Provost, vice president of external and community affairs for the SFSS, in the statement.

The SFSS says nearly three-quarters of SFU students rely on public transit, and more than half of that group uses TransLink's number 145 bus, which the gondola would replace.

The fate of the project now rests with the Mayors' Council on Regional Transportation, which oversees TransLink and sets the transit provider's investment priorities.