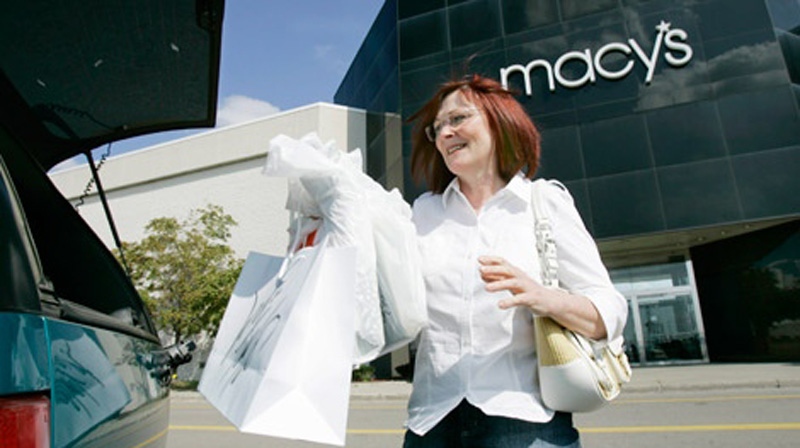 A woman is shown shopping at Macy's, a U.S.-based retail chain, in this undated file photo.

British Columbian businesses say they’re losing out on billions of dollars to stores south of the border as the number of U.S.-bound shoppers continues its sharp growth – more than doubling in the last few years.

The Business Council of British Columbia estimates that B.C. residents spent between $1 billion and $1.6-billion on short-term cross-border shopping trips to the United States last year, while increasing their annual trips to the U.S. over the past few years from 2.3 million to nearly 5.7 million.

Throw in long-term trips longer than two days and that number rises to $2.6 billion.

Canada’s strong dollar, the United States’ cheap gas and groceries and a recent increase in duty free exemption amounts are behind the flood of southbound shoppers, according to the business council’s chief economist and vice-president Ken Peacock.

“A family of four people…can save a fair bit of money by just buying gas and some groceries from across the line,” he said. “Cereal is quite a bit less expensive, things like batteries as well…pretty much all the items we looked at were between 15 to 50 per cent less expensive.”

The increase in southbound shoppers means less money is being spent on retail goods here in B.C., the business council said.

“That’s not the answer. No sort of taxation or restrictions,” he said. “There are some things governments can do, and the main thing is to keep business costs as low as possible.”

He said to keep Canadian shoppers in Canada, the government must make the cost of doing business less prohibitive and eventually do away with “significant” tariffs.

But businesses also deserve some of the blame for losing out to U.S. retailers, which offer a better shopping experience than their northern neighbours, according to Bruce Cran, the president of the Consumer’s Association of Canada.

“[Consumers] are telling us they’re treated better by the American stores,” he said. “People are complaining about long queues, lineups and god-knows-what at our retailers, and they’re telling us they don’t have the across the border.”

He said stores here will be given a run for their money when American big-box companies like Target establish themselves in B.C., and hopefully, the competition will lead to lower prices.

“These problems should be rectifiable within the marketplace,” he said. “Maybe having the big American outlets come up might be the way this is done.”

The council estimated that if the number of cross-border shoppers remained at 2009 levels, retail sales in B.C. would have expanded by three per cent last year instead of just 1.9 per cent.

British Columbians made double the amount of same-day trips to the U.S. in 2012 as people from Ontario and 60 times as many as Albertans, according to the council.