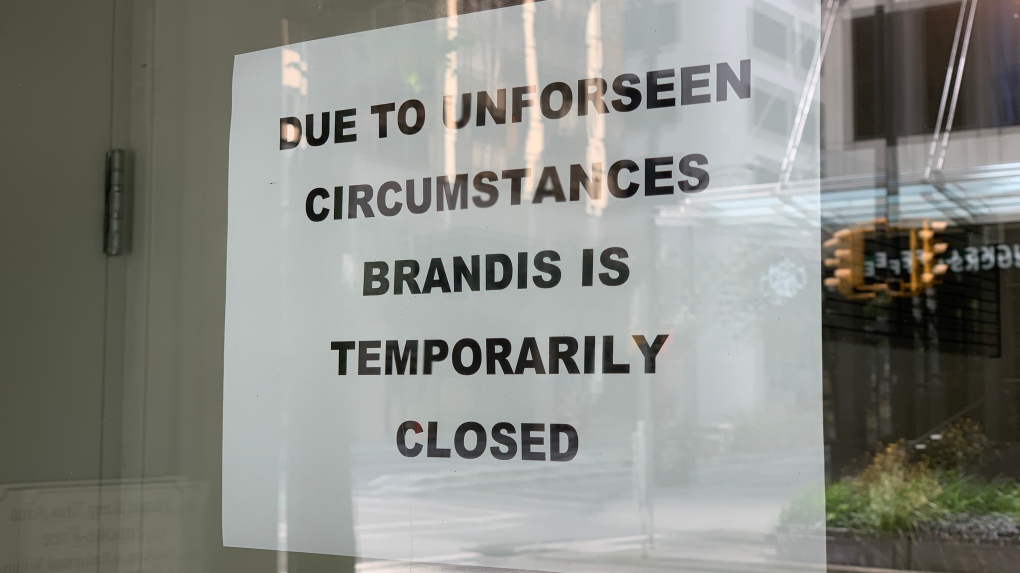 A Vancouver strip club is closed and the local health authority is warning the public after multiple people who visited the lounge this week tested positive for COVID-19. (CTV)

VANCOUVER -- A strip club in downtown Vancouver is preparing to reopen the week after a COVID-19 "exposure event" that left a handful of people sick.

Brandi's Exotic Show Lounge announced on social media that it has been cleared to reopen by Vancouver Coastal Health after a thorough inspection and review of safety protocols.

"We have worked with VCH closely to ensure that we meet the necessary guidelines for sanitation," the establishment said. "The club has been fully sanitized, and we have added more protocols to keep our guests and staff safe."

Over the weekend, health officials issued a public warning that people who visited the club on the nights of June 21, 22, 23 or 24 might have been exposed to the novel coronavirus.

Provincial health officer Dr. Bonnie Henry said the alert was necessary because it was impossible to track down every patron who visited Brandi's on the nights in question, despite their best efforts.

As of Monday afternoon, officials said three people who were at the club had tested positive for COVID-19, and several others had been asked to self-isolate.

It's unclear how the exposure event happened. Officials have not released any details about the incident, but said it's important that people stay home while sick and that businesses take precautions to ensure public safety.

In a previous post on its Instagram page, Brandi's said it closed after learning "that someone who had possibly been exposed to COVID-19 had entered our establishment."

Anyone who visited the strip club from June 21-24 from 9 p.m. to 3 a.m. is still asked to self-monitor and to call and request a test if they develop symptoms.

After a thorough inspection and a complete review of all protocols by Vancouver Coastal Health, we have been cleared for a safe reopen. We have worked with VCH closely to ensure that we meet the necessary guidelines for sanitation . The club has been fully sanitized, and we have added more protocols to keep our guests and staff safe.