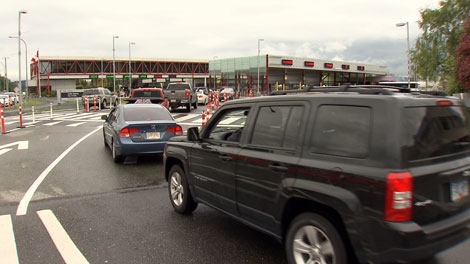 Drivers line up to cross into Canada at the Pacific Highway crossing in Blaine, WA. June 1, 2012. (CTV)

A former B.C. border guard has been found guilty for his role in a multi-million-dollar cocaine importing conspiracy.

Baljinder Singh Kandola, 39, was arrested on Oct. 25, 2007 after a truck carrying 208 kilograms of cocaine passed through his inspection booth at the Pacific Highway Border Crossing. The drugs were valued at between $5 million and $6 million.

A B.C. Supreme Court judge found Kandola guilty Friday of conspiracy to import drugs, importing a controlled substance, breach of trust and accepting a bribe for a scheme that began in the spring of 2006.

“[Kandola] played a crucial role in using his position as a public official with the CBSA to aid himself and others to import cocaine into Canada. It hardly needs mentioning that Kandola’s conduct was directly related to his position as a [border service officer] and was an intentional, serious and marked departure from the standards set out for those in his position,” Justice Selwyn Romilly wrote in his judgment.

While Kandola admitted that he received $10,000 in payment from Johal for “waiving” him through the customs, he argued in court that he did not realize there were drugs inside the vehicle.

But the judge found the border guard had a “very selective memory” of the events in question and rejected his evidence as “not capable of belief.”

Before it was smuggled into Canada by driver Herman Singh Riar, the cocaine was stowed in a storage locker in Bothell, Washington. Evidence presented in court showed that Kandola used dedicated cell phones to communicate extensively with Johal and Riar to make sure both men knew when he would be working in the inspection area. Kandola also made sure there would be no record of the truck ever crossing the border.

“The evidence of the level of planning involved in this matter demonstrates that this importation scheme clearly had nothing to do with car parts,” Romilly wrote.

“If Johal or Riar were smuggling car parts and someone other than Kandola was in the [primary inspection line], they could simply declare the goods, fill out the paperwork and pay the taxes and duties. If, however, Johal and Riar were smuggling cocaine, the risks increase significantly.”

Riar has already been sentenced to 12 years in prison for his role in the conspiracy. A sentencing hearing for Kandola and Johal has been scheduled to start July 9.

Another member of the conspiracy, Charles Lai, was sentenced to 13 years in a U.S. prison for his role on the American side of the scheme.