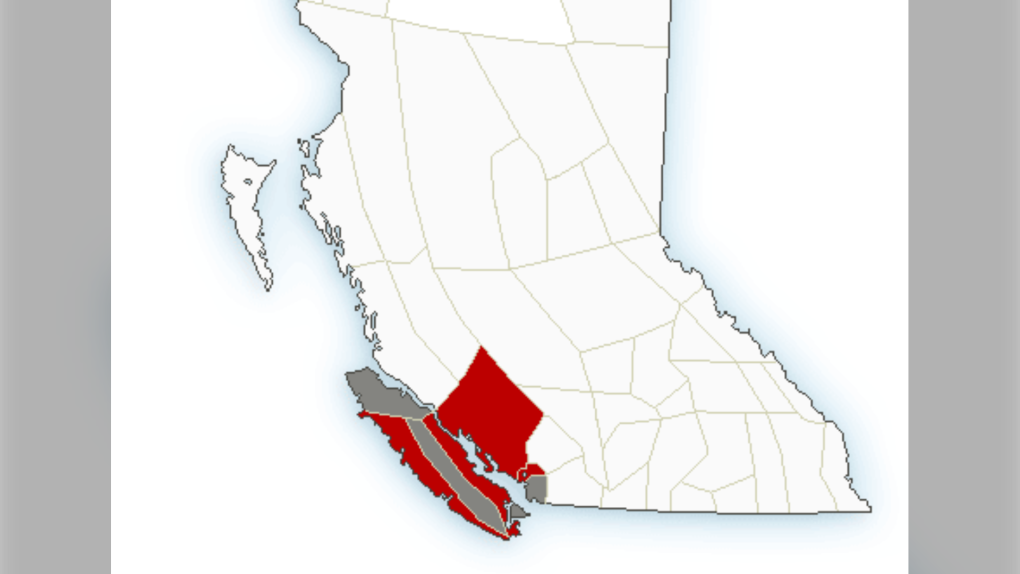 A map from Environment Canada shows several weather advisories for the south coast of B.C. on Saturday, Oct. 23, 2021.
Vancouver -

A bomb cyclone storm is expected to make landfall in B.C. on Sunday, bringing wind gusts of up to 100 kilometres per hour.

The storm has been brewing over the Pacific Ocean for several days, and although it will reach its peak before reaching B.C.’s shores, it’s likely to cause damage and power outages.

Wind and rain are expected to begin early Sunday morning and continue through Monday, according to Environment and Climate Change Canada meteorologist Bobby Sekhon.

A storm is called a bomb cyclone’ when its pressure system quickly intensifies by dropping 24 millibars within 24 hours, Sekhon said.

“That means really strong winds and heavy rain embedded in that storm,” he said.

“This bomb is happening offshore, and by the time it comes to Northern Vancouver Island, it's actually going to ... be a lot less intensive than what we've seen over the Pacific.”

Environment Canada has issued special weather and wind warnings for the majority of Vancouver Island and the southern coast of the mainland, including Metro Vancouver.

On Monday morning, the western areas of Metro Vancouver will see their strongest winds with gusts potentially exceeding 80 kilometres per hour.

The storm will be dynamic, Sekhon said, and he warned people not to be fooled into a false sense of security when a forecasted lull sets in.

“We’re going to see winds ramping up (Sunday) morning, and they may have a little bit of a lull on Sunday evening,” he said.

“But then (the winds will) ramp back up on Monday so it’s really a 24-hour event, with some fluctuation in the wind speed.”

Sekhon also encouraged people to be ready for power outages and to secure loose items in their yards.

“Everybody should take some caution as, you know, there could be power outages, tree damage, and flying objects that are loose,” he said.

An Amber Alert has been issued after police say a two-year-old boy was abducted by his mother from downtown Calgary Thursday afternoon. Calgary police say Hawkin Gerald Thomas was abducted at approximately 2:30 p.m. after a supervised visitation.

According to a new study, domesticated cats have smaller brains than their wild cat ancestors, confirming older studies and opening up new insights into how domestication affects animals.